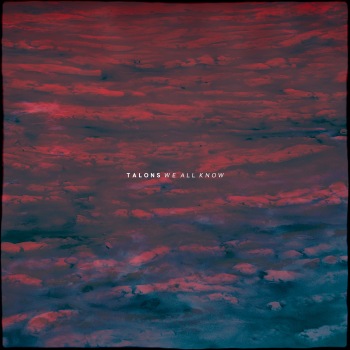 As willing as many are to lump all instrumental post-rock together as understated background noise that’s only a half-step away from being a film score, not only is that demonstrably false, but Talons have often proven how far this sort of thing can be taken. The acclaim awarded to 2014’s New Topographics definitely saw doors opening for the sextet to take their brand of post-rock to bold new heights, keeping hold of an elegance and delicacy thanks to their dual-violin leading approach, but also unafraid to contort itself into darker, weirder positions. Of course, a band like this is never going to be a mainstream darling, but New Topographics was what really pushed Talons into the genre’s limelight for many, to see what else this band could possibly achieve.

And going off We All Know the answer seems to be fairly straightforward – sign to Holy Roar and use the motivation of one of the best underground labels around to make an even more diverse, experimental album. At least, it gets there eventually, with The Drowning and On Levels starting out on a particularly sour note, the sort of sluggishly-paced, densely-packed openers that really weight the album’s first half down in serving as the complete antithesis to the pinpoint craft that Talons have previously displayed. Get to Cradles though, with its understated guitar and eerie juxtaposition between plucked and crying violins, and Talons’ game plan suddenly becomes a lot more solid. Even if this mightn’t be the one to resonate with post-rock newcomers, the balance between approaches to the genre on We All Know remains tight and precariously maintained, and Talons do a great job at navigating around it.

That alone sets them apart from many of their contemporaries, in that We All Know actually feels like elements explored individually rather than a single piece split into movements. Admittedly the lack of flow can feel a tad jarring (compared to the fluid motion that’s practically been conditioned into most listeners of post-rock), but they’re choices that Talons can get around with ease, and in terms of a musical palette, theirs proves to be a lot more diverse. Southern Shade remains the sort of ethereal, chilly piece you’d expect from a band like this (though the various world music influences give specks of colour that are much appreciated), but it’s completely at odds with the thunderous post-metal of Over And Again, or the spasmodic chaos of Movements On Seven. It’s variety that post-rock doesn’t often go into, and even if it doesn’t completely mesh together all the time, the ambition alone speaks for itself.

It’s not the greatest thing ever by any means – it’s too readily inconsistent to consistently reach any level beyond “very good” – but there’s a certain mesmerising quality to We All Know that constantly draws you back for more, if only to dissect Talons’ playing some more to see what else is there. And that’s the sign of a good post-rock album, especially when it actually feels like an active experience to listen to, rather than just passive white noise to fill a room. There’s a bit more that could be done, but that shouldn’t discount the masses of work that Talons have already pulled off.

For fans of: And So I Watch You From Afar, Mogwai, Pijn
Words by Luke Nuttall

‘We All Know’ by Talons is released on 27th July on Holy Roar Records.