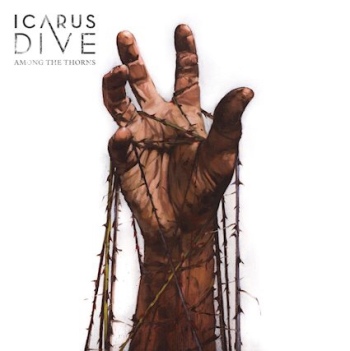 Progressive rock takes on many forms making it an incredibly ambiguous, but this creates an allowance of experimentation for bands of this genre. Icarus Dive, originating from Guildford, explore rock and metal sounds to create a theatrical sound. Among The Thorns is the new EP from the band that provides an insight into their dynamic songwriting and techniques that suggest influences from Muse, Alter Bridge and Radiohead to name but a few.

Hydra opens the EP with a rebellious tone; megaphone voice effects, fast guitar riffs and licks create a high energy level. The sudden drop to bass, drums and vocals creates a dynamic contrast and adds a blues feel to the track. The soaring vocals of lead vocalist Joe Crook significantly contribute to Icarus Dive’s sound. The harmonising sections, falsetto reaches and group shouts create a greater level of interest and activity in the vocal line. It also strongly suggests Muse influences – vocal styles used in this track are incredibly similar to those used by Matt Bellamy particularly in the Absolution and Origin Of Symmetry eras. The prominent bass and clean-cut guitar rhythms create a neat sound with the guitars whilst producing a heavier edge to the track that suits the rebellious atmosphere.

Murder And Lies takes the theatrical to a new level; Crook’s vocals range from the more aggressive edge to the smooth falsetto in the chorus. This track really shows off the range of his voice with his falsetto reaching new heights. The fast rhythm of this track keeps up the high energy from the previous track and builds the dramatic atmosphere contrasted with the drawn-out vocals. Sustained vocal notes add a seductive twist to the dark tone of the track. Blues chord sequences interspersed add another layer of interest and complement the dark theatrical mood.

The New Gods develops away from the fast, short guitar rhythms of the previous and explores a different sound; the bouncing guitar melody creates a funk feel in the verse. The chorus carries a larger sound with more drawn out guitar chords. The edginess that is present throughout the EP remains with the use of distortion on the guitars. The sudden cut off at the end of the track adds an unexpected element to the track and a feeling of incompleteness. The thought put into the outros of each track shows the attentions paid to every detail in their songwriting, and emphasizes the dramatic, theatrical themes that run through this EP.

Icarus Dive are clearly very talented with their tracks incorporating a range of genre influences. Their performance abilities are high with intricate and edgy guitar sections, and the lead vocals are really something incredible. However, the strength of the similarities between them and Muse cannot be ignored. These tracks could easily be mistaken for those of the world-renowned trio. Icarus Dive have proven their worth but they need to tweak their sound into something that is more unique to them.

‘Among The Thorns’ by Icarus Dive is released on 21st September.