For our next year end list, we’ve taken a look at the albums that had such high expectations held above them, but, in one way or another, ultimately struggled to live up to them – these are the biggest disappointments of 2018.

5. Bullet For My Valentine – Gravity
Regardless of whether this can really be considered a disappointment considering the tight downward spiral that Bullet For My Valentine have been on for the last couple of albums, there’s no doubt that Gravity is representative of a band as a shell of their former selves. It would be something if they had the assets to properly manage a shift to radio-rock, but with colourless, too-clean-by-half instrumentation, production with even the slightest hint of texture sandblasted away and AutoTune levels that don’t even try to be subtle, it’s a direct pivot towards mainstream mush that seems to embrace every negative stereotype rather than avoid them. Coupled with a lack of memorability across the board, it would’ve been better if Bullet For My Valentine hadn’t even bothered trying.

4. Twenty One Pilots – Trench
However Trench turned out, there was no way that it was going to scupper Twenty One Pilots’ path to becoming one of the biggest bands on the planet. And lo and behold, it hasn’t; next year will see them take to the biggest stages of their career, all buoyed by another album that saw their rabid fanbase once again pounce on any opportunity to dish out overreactions like they were going out of fashion. And it’s no wonder that they did either, especially when Trench was specifically designed to curry favour with an audience that didn’t need any more encouragement, and subsequently end up as a drab, borderline insufferable listen to everyone else. Sure, it had its moments that really did shine, especially in the uphill battle of marketing the duo as a rock band, but on the whole, Trench really was a sagging, forgettable listen, doing little to break the stigma of the Clique and more to raise the question of why Twenty One Pilots are as huge as they are.

3. State Champs – Living Proof
In hindsight, State Champs’ Around The World And Back does have more shortcomings than many would have admitted (us included), but it was far from a bad album and only served as more evidence for them being among the shining lights of modern pop-punk. Living Proof couldn’t have been further from that, however, not only as their most forgettable to date, but also succumbing to the most played-out and just plain worst tropes of the genre’s polished, preened outings that they’d previously done such a good job at avoiding. It had its moments, of course, but without the standout hits that had previously defined them as a band, or even the rock-solid melodies that had put them in such a prestigious position within this notoriously crowded genre, Living Proof ultimately felt like a limp-wristed attempt at cashing in on trends that didn’t need to happen.

2. Arctic Monkeys – Tranquility Base Hotel + Casino
For the Arctic Monkeys, 2018 will likely always be the year that they hurtled towards their absolute breaking point, rammed into it at full speed, and then kept going. Not only did Alex Turner transition from lounge-lizard greaser to full-on lounge singer, but an accompaniment of formless, flavourless jazz did nothing but cripple a band who had come off their most successful album in years. It’s true that the intense distaste for Tranquility Base Hotel + Casino has somewhat cooled with time, but even so, the lack of interest is still there, something that the Arctic Monkeys have done well to avoid over the years, even with their less successful releases. With this one, though, their fanbase has openly splintered and their most workable sound in years has been switched out for the complete opposite, and if that isn’t the epitome of a disappointment, then nothing is.

1. Frank Turner – Be More Kind
For all that’s been said about Frank Turner, it’s hard to deny the consistency of his output and how imperative his work ethic has been in shaping that, and that’s incredibly easy to appreciate. But whether it was just a lack of creative mojo or the much-prophesied burnout finally setting in, Be More Kind was a drastic dip in almost every conceivable fashion, replacing the usual rousing, fiery folk-punk stomp with contemplative, frankly dull ruminations on modern politics that landed with so little of an impact. And if it wasn’t for the storied back catalogue, that would be disappointing enough, but Turner’s reputation of a genuine hero in British music makes such a limp, flaccid offering all the more difficult to swallow. Sure, albums have been released this year that have been far worse, but given the usual standard of quality that Turner’s material is often held against, it’s hard to view this as anything less than a massive drop-off. 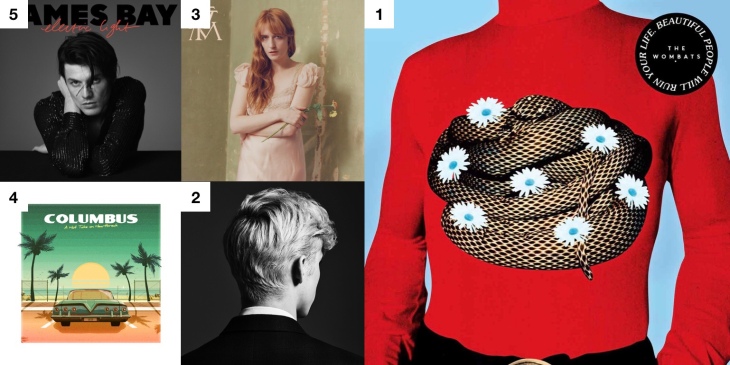 5. James Bay – Electric Light
Ordinarily, you’d think a mainstream acoustic singer songwriter would become more interesting by abandoning the acoustic guitar for an electric one and a rockstar image, but James Bay bucked the trend this year with his totally style-over-substance record Electric Light. Of the rush of solo male singer-songwriters dominating UK charts a few years ago, he was one of the most likable. His songs had heart, tempo and beauty in spades. The decision to try and replace the heart with a rock swagger (something his delicate vocals can only produce a watered-down version of) has resulted in a record with no soul or feeling, something that not only is he obviously capable of, but is what he’s known for. On the face of it, Bay’s new leather-clad image indicates the whole package, but there’s really nothing under the surface.

4. Columbus – A Hot Take On Heartbreak
Columbus became one of the best-kept secrets in rock music in 2016. Their emo-drenched, beefy pop punk felt like a genuine breath of fresh air, with guts, choruses and sheer, relatable honesty. That took a dive with this year’s A Hot Take On Heartbreak, which saw the now-duo try to muscle in with the pop punk in crowd and regurgitating tropes like there’s no tomorrow. The doo-wop inspired pop-punk song? Check. The song about bad mental health designed for crowds to sing back? Check. A sound that’s identical to Seaway’s on Vacation? Check. The quality of the lyrics has massively dropped too, relying on every cliche in the genre from comparing love to a heart attack to waking up one morning and going about your day realising you feel like shit and want your girlfriend back. While completely context-less it isn’t a bad album, having one of the most discernible bands in a scene start to pander to what the unoriginals do is such a wasted opportunity.

3. Florence + The Machine – High As Hope
Florence + the Machine have been on a straightforward trajectory to glossier and more grandiose music for years, and while her latest record carries that on, High As Hope is an odd one. On one hand its thin-sounding instrumentation and slow pace feels completely out of left field, but think more about the progression of Florence’s career into a more commercially acceptable realm, then it feels like the kind of shakeup that feels the least alienating. Sadly though, it’s the starkness and lack of bombast that is totally alienating. Sure, her vocals are as always stunning, and the potent lyrics are the best part of the record, but there’s nothing here really worth remembering except the stunning Sky Full Of Song, the only song that achieves the intended vibe. While High As Hope was clearly therapeutic to make, Florence is undoubtedly capable of much more.

2. Troye Sivan – Bloom
If the singles leading up to Bloom were anything to go by, it was sure to be the album that really allowed Troye Sivan to become the star he has every capability to be. When it dropped though, it seemed to be more of a case of false advertising. There are some solid songs on here that totally fit with everything Sivan is going for, but the three singles (particularly Dance To This, which narrowly missed out on this writer’s Best Singles list for the year) are by a mile the best has to offer. There’s far too much boring filler on an album that should’ve been career-defining. He definitely has more than enough time to achieve that level (and he will), but at this moment, it feels like 2018 should’ve been that year.

1. The Wombats – Beautiful People Will Ruin Your Life
This year saw the first real career misstep for The Wombats. Every distinct era of their discography has felt so creative and natural, from the schoolboy indie anthems to embracing electronic elements more and more in balance with their natural charm (resulting in their best album to date: 2015’s Glitterbug). Beautiful People Will Ruin Your Life feels like a step back – they’ve gone back to their roots of real rock band instruments, but the smile interlaced between bars has gone, along with their ability to write inescapable melodies. With the exception of the gorgeous Turn, there isn’t anything on this album really worth coming back to (not that you’d really remember anyway), and it’s a shame to see such a usually reliable band fade like this.