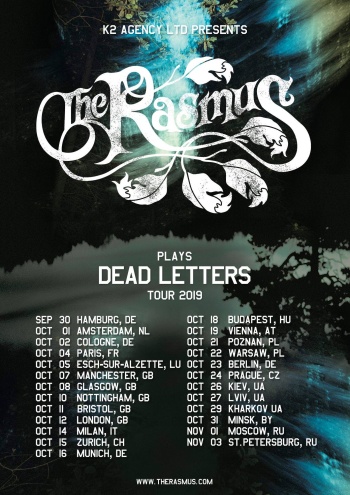 The Rasmus are best known for their track In the Shadows, and despite being released all the way back in 2003, it’s still a popular track. The Dead Letters album, on which In The Shadows features, celebrated its fifteenth anniversary last year and was the album which brought the Finnish rockers into the international spotlight. Fans eagerly await outside the Ritz. It’s incredible to see so many fans of all ages and backgrounds, and so many wearing that band’s t-shirts. The fans here are clearly dedicated; fans who have been following The Rasmus for many years.

Eddie Stoilow (7) take to the stage, the quintet from Prague are supporting the majority of The Rasmus’ tour. They describe themselves as new-pop, and it’s a fitting description. The first half of their set has strong pop influences. The clean guitar tone introduces some indie elements, whilst the keys add some extra interesting instrumentation. The initial tracks have a good feel to them, but the lower tones of the sound are lacking an extra something. However, as their set progressed, they performed a number of heavier tracks. They can clearly pack more of a punch – the guitar tones introduced an edgier sound with distortion. The lead vocals have a smooth texture and glide over the harsh texture in the instrumentation, creating an interesting contrast, whilst the synths and keys produce a very atmospheric setting. Emotion builds in their final tracks. Not only with the use of more emotive sounds and textures, but also shown through the vocalist Jan Žampa dedicating one of their tracks to a family member who passed away. They are well received by the crowd and are a fitting opener for The Rasmus.

Before long, it is time for the main event. The Rasmus (9) make a grand entrance. This tour isn’t just about performing Dead Letters in its entirety. It’s a celebration of The Rasmus and all they have achieved over the years. The dramatic visuals featuring a voice over from frontman Lauri Ylönen revealing the meaning behind the album. From the opening track, First Day Of My Life, the audience are singing their hearts out and this continues through the majority of their performance. The performance of these tracks is in keeping with the original recordings. They’ve maintained the same guitar and bass tones, and this really brings the performance of the album to life. The addition of backing vocals from bassist Eero Heinonen, gives the live sound an extra boost, but remains in keeping with their sound. In the Shadows, the second track on the album, sees the audience explode into the signature “oh“s of the song. The venue feels like it’s transported back to 2003 with this performance. The album has a number of emotional ties for example, Still Standing was written following the death of a friend and this emotion is shown through the band’s performance. As the album progresses, fan favourites including In My Life, Guilty and Not Like The Other Girls sees the audience dancing and singing along. The final track on the Dead Letters album is Funeral Song. This is a very emotive and dark track. The instrumentation consists of orchestral strings and sees Lauri deliver a heartfelt performance alone on the stage.

The end of the Dead Letters album sees the first half of their performance draw to a close. The latter half of their set was voted for by fans online and brings some interesting, and never before seen, live performances. The quartet take an acoustic interlude. Performing some older tracks, prior to 2003, along with ones from later releases. Their acoustic performance of No Fear from the Hide from the Sun album brought an entirely different feel to the track. Replacing the punchy distortion with acoustic rhythms worked really well. Sail Away easily translates into an acoustic track. It brought an uplifting tone to the evening contrasting the dark themes heavy sounds of the Dead Letters album. Following this short interlude, they return to a heavier sound. The variety of tracks the fans had voted for is very interesting; the Hide from the Sun album seems to be hugely popular. Released after Dead Letters in 2005, this album continued some of the same dark themes but saw their sound develop with wide use of synths and more energetic rhythms. Night After Night (Out Of The Shadows) and Lucifer’s Angel once again sees the audience singing along – even contributing to the backing vocals in a grand chorus. The quartet perform Dead Promises live for the first time during this set. This track is incredibly dramatic with heavily distorted staccato rhythms and a haunting synth and violin melody that flows through the track.

This evening truly is a celebration of The Rasmus. Dead Letters brought the Finnish quartet international success and it’s great to see that this is an album still loved by fans. There is a huge amount of emotion flowing through the audience; many have grown up listening to The Rasmus, myself included, and continue to support them. This evening isn’t just about looking to the past achievements of the band. Lauri’s announcement that the group are in the process of writing a new album fills the venue with excitement.