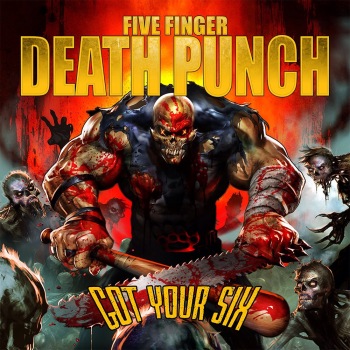 It may just be a coincidence, but it seems that as Five Finger Death Punch get bigger, so does their mascot. Knucklehead, the zombified man-beast that has adorned all their album artwork since 2007’s debut The Way Of The Fist, has evolved from a cartoonified head on that release to a sort of combat demon figure on 2013’s double album The Wrong Side Of Heaven And The Righteous Side Of Hell. Now on the Las Vegas quintet’s sixth full-length Got Your Six, he’s a full-blown, weapon-wielding juggernaut, making it even more probable that the figure represents the band’s rise to metal stardom. Once a band everyone loved to hate, those days now seem like distant memories with them now standing on the cusp of true greatness. If there’s any justice, Got Your Six will be the album that lets them take that leap.

Musically, the band plough the same furrow they have been for some time, their anthemic meeting of full-fat, skull-crushing metal and titanic radio rock. But while there are very few surprises, it’s the unbridled passion and verve these songs are delivered with that lifts them to a higher level of greatness. The choppy, understated verses and lumbering chorus of lead single Jekyll And Hyde may have been a rather iffy start to the campaign, but that’s the only misstep to be found. It contains everything that Five Finger Death Punch have made their oeuvre throughout their career, but honed to the absolute best of their abilities. No Sudden Movement thrives on its neck-snapping brutality, while Hell To Pay and the particularly huge Ain’t My Last Dance get those massive choruses in just as massively as ever, and tender ballad Digging My Own Grave genuinely sounds emotional rather than mawkish. As said earlier, anyone who has heard Five Finger Death Punch undoubtedly know what to expect here, but, as an album, it’s hard to think of a better or more concise Download headline audition that this.

The band themselves have also noticeably upped the ante in terms of playing as well. It’s difficult to pinpoint, but there’s just something on Got Your Six that feels like a definite step up. Both Jason Hook and Zoltan Bathory have really upped their guitar game throughout – from the bulldozing chug of Boots And Blood to the rather poignant acoustic solo on Question Everything, it really feels like every possible element that can be has been embraced, and done so in a professional, fluid fashion. The real cornerstone of the band’s sound though, is Ivan Moody, and there’s not a single moment on Got Your Six where he doesn’t deliver a typically stunning vocal performance. He’s mastered both the clean and unclean vocal styles that are often present on ‘Death Punch albums, but it never feels like he’s spreading himself too thinly; each technique is just as good as each other, and that what makes this album so great. It means there’s never too much of a dip between the heavier and more melodic tracks, and that there’s a distinct flow throughout that makes it an entirely cohesive listen. Of course, with a band like ‘Death Punch – a band where The Riff and The Roar will always take priority over a buried sub-narrative or worldly concept – it’s not worth going too deeply into the machinations of creating a flowing tracklisting, but what can’t be ignored is the sky-high quality control in place on this album.

This is exactly the album that Five Finger Death Punch had to make in order to take their place at metal’s top tier. They’ve always hinted at greatness in the past – and often they had moments of it – but Got Your Six is the sound of a band capitalising on every iota of their potential in truly spectacular fashion. That title isn’t just a clever allusion at the fact that this is their sixth album – it’s a military term meaning to have someone’s back. With this album, Five Finger Death Punch need no one to look out for them anymore – they’re fully ready to take on the world all by themselves.

‘Got Your Six’ by Five Finger Death Punch is out now on Eleven Seven Music.