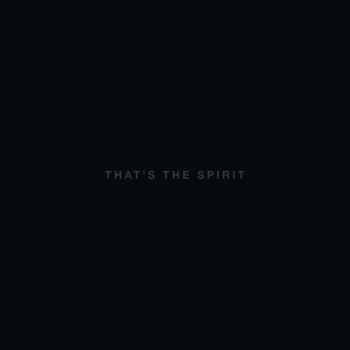 It’s been said before and it’ll be said many more times, but the distance in which Bring Me The Horizon have ascended is nothing short of astounding. In their twelve years – a relatively short time for a properly established band – they’ve gone from a mob of deathcore kids who were genuinely the most hated band in Britain to full-blown arena-conquerors, and nothing short of becoming one of the best bands the UK has to offer. But everyone knows that; it’s time for something new. That’s where That’s The Spirit comes in, acting as a testament to where they are now, but also with an eye on moving forward.

It’s an incredibly bold album, and the most eclectic body of work they’ve produced. The first two preview tracks – Drown and Happy Song – are the perfect evidence for this. The former is an absolutely colossal arena anthem with hushed verses and an explosive chorus not unlike Thirty Seconds To Mars or latter-day Linkin Park, while the latter is built around a driving Deftones-style riff and cheerleader chant. Gone are any criticisms of derivativeness that could have previously been levelled at them – this is Bring Me The Horizon working on their own terms. Of those terms, being a metal band certainly isn’t one of them anymore, as That’s The Spirit is definitely not a metal album. Instead, their sound has morphed into that of triumphant arena rock, coupled with almost full-on dance electronics thanks to Jordan Fish, who plays a much more integral role than ever before.

It’s further out of their comfort zone than they’ve ever ventured before, but it truly works. It does so because they make it work – where most bands would have crumbled under such immense pressure, Bring Me have risen to the challenge and delivered something properly astounding, but different to anything that has come before it. Sweeping beds of strings that back Avalanche and True Friends make for some truly bombastic, arena-ready cuts, while Blasphemy slaps you across the face with a bluesy guitar solo, and Follow You alternates subtlety and hugeness with hip-hop beats before erupting into a massive chorus. Oil Sykes’ screams have more or less been ditched altogether and replaced with weathered croons, something he proves incredibly adept at, and it really fits with the gentler, more mid-paced nature of the album.

What’s truly remarkable about That’s The Spirit is its consistency. Where in the past Bring Me The Horizon albums have had a handful of songs that truly stand above the rest, That’s The Spirit doesn’t have the same sort of showstopper in its arsenal, but the whole body of work is of the same high quality, making for a smooth listen the whole way through. Having said that, it’s the final track Oh No that really catches you off guard. As if the form it has taken as a Balearic, Ibiza-style dance song with bursts of saxophone isn’t enough to prove this is a completely different band, it’s the message. According to Sykes, it’s about “people my age who are still trying to live like they did when they were eighteen”, and how “all good things come to an end”. From a band whose go-to line used to be “Party till you pass out, drink till you’re dead”, there’s a great deal of profundity in that statement, and shows just how much maturity has come to them.

And that’s something that won’t sit well with old fans. There will unquestionably be people who will bitch about how it’s ‘not heavy’, but there are plenty of bands who’d be more than happy to shove generic breakdowns and callouts down every orifice. Bring Me The Horizon are not one of those bands anymore, and they’re unlikely to ever be again. As That’s The Spirit shows, they’re far too creative, ambitious and ballsy to ever go back to where they once were. Because in a way, That’s The Spirit is the archetypal 2015 rock album – it transcends creativeness, instead filling the negative space of alternative music for something has never been done before. It all results in what is undoubtedly their finest achievement to date, and the one that should take them to the next level that they’ve been gunning for for some time. But one question remains – how the hell do they follow this up?

‘That’s The Spirit’ by Bring Me The Horizon is out now on Sony Music.