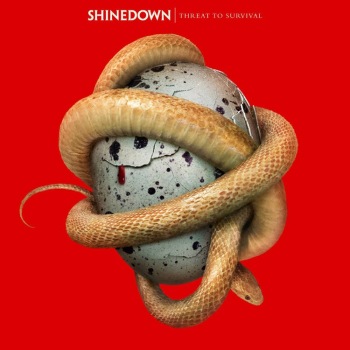 You might not have realised it, but along with being the leading light of the modern hard rock scene, Shinedown have slowly but surely become one of the most consistent bands in alternative music. Some might dismiss this as too bold a claim, but recent efforts The Sound Of Madness and Amaryllis have proved it immensely, with the former’s stellar tracklisting especially more than responsible for taking the quartet past their original intended dadrock-like fanbase. They may not be the most mainstream of bands, but their heartfelt lyrics and colossal riffs have certainly made them one of the most reliable.

But this reliability may be compromised for a portion of Shinedown’s fanbase with new album Threat To Survival. Sure, the vast majority of the eleven tracks are underpinned by Zach Myers’ ear-bursting guitar parts and Brent Smith’s trademark soaring vocals, but it seems that Shinedown have become the latest band to throw synths into the mix in the hope of modernising their sound. But unlike most pretenders to this type of reinvention, they pull it off extraordinarily well by making the additions subtle. The massive riffs are still very much the focal point of the likes of Cut The Cord and Outcast (which both feature two of the ballsiest riffs Shinedown have ever recorded). But the further Threat To Survival progresses, the more dominant the electronics become, resulting in lush anthem Thick As Thieves near the back end of the record which boasts a – dare I say – CHVRCHES-style synth/vocalising opening, and dreamy closing ballad Misfits – both of which have either delayed or non-existent guitar arrivals.

The sad part is that next to all this innovation on Threat To Survival, Shinedown’s original sound pales in comparison. The tracks involving synth use are undoubtedly the strongest, leaving The Sound Of Madness-esque How Did You Love the closest Shinedown could possibly get to plodding, and would-be vicious Dangerous lose its bite. And single Black Cadillac becomes rather irritating after a while, if the jazz-like piano hook didn’t already put you off. Although Brent Smith’s vocals are unbelievably strong throughout the entirety of the record, It All Adds Up is a perfect example of how they only ever seem to transition from low and authoritative to belting out a chorus.

Although Threat To Survival is in no way a bad album, there is definitely more filler than there needs to be. But there really is something for every Shinedown fan here – be it those diehard fans of that classic Shinedown sound, or anyone wanting a twist on what is already there. Even those not originally fans may be converted due to the large scale of experimentation evident. That seal of Shinedown quality is present, but that is definitely not the main thing to take from this album. The choruses here are absolutely gargantuan, especially on album highlight State Of My Head, and the simplicity of them pretty much ensure massive crowds will be echoing them soon enough. They may be supporting Black Stone Cherry in arenas this coming January, but surely it won’t be long before Shinedown are headlining them by themselves.

‘Threat To Survival’ by Shinedown is out now on Atlantic Records.