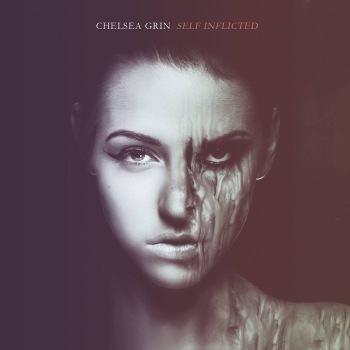 Heavier bands tend to have a very high opinion of themselves. Barely an album release date gets announced without the record in question being branded with some sort superlative or hyperbolic statement that, most of the time, it can never live up to. Still, in the run-up to their fourth album Self Inflicted, Chelsea Grin’s self-promotion at least had a shred of believability. On one hand there was the album’s lead single Clickbait, a track rightly criticising the reprehensible form that mainstream media has taken, at least suggesting some kind of social awareness for the forthcoming release. Then again, the album was described early on as the deathcore mob’s ‘most extreme release to date’, a similarly tiresome route of overhype that’s been done to absolute death.

In all actuality, Self Inflicted falls somewhere in between the two. It undeniably has presence and all the impact of a nuclear missile, but the vast majority is just meat-and-potatoes deathcore through and through, co-opting every genre convention in a way that frequently feels like it’s been done before. Go through this album with a list of deathcore clichés and pretty much every component can be ticked off – a binary switch in style between a mid-paced slam and a heavy, sludgy groove; hellish, rumbling vocals with copious uses of the word ‘fuck’; breakdowns abused so much that they might as well file for court orders at this point; every single one is present and correct on this album, and at multiple points as well. And while this should placate the pit warriors after their latest mosh fix, there’s not a great deal that has much of an effect on a wider scale.

But the thing is, when put alongside some of deathcore’s other patrons, Chelsea Grin don’t actually seem that bad. They’re nowhere near as stupid or hideously offensive as Emmure or Attila, and though the same sort of posturing can be eked out in certain cases like on Love Song, there’s not the same overriding sense of testosterone-drenched chauvinism that makes those bands so utterly detestable. Plus, Chelsea Grin do have a couple of nice ideas that are realised well here, like Four Horsemen, which is pitched somewhere between skull-crushing brutality and a deathly gothic swell, or the surprisingly textured symphonics of Never, Forever.

Other than that it’s pretty much business as usual, and business feels pretty stagnant in all honesty. Self Inflicted is hard-hitting for sure, but when it sticks to more traditional genre ideals, it feels far too boxed in by deathcore’s rigid boundaries. It’s not terrible, let’s make that clear, but it brings nothing new to the table, and as a result, the likes of Scratching And Screaming and the tedious misanthropy of Broken Bonds feel like lesser versions of what Suicide Silence have been doing much better for years.

Self Inflicted really is a difficult album to give an overall judgement on, as it honestly doesn’t provoke any strong emotions either way. On a fundamental, constructional level, it pretty much lacks any negatives at all, but that’s balanced out by the fact that there are no glaring positives either. It’s a good album for what it is, but what it is really doesn’t have the same power as it once did, and Chelsea Grin are left floating in the ether. The jury’s out at the minute for how Self Inflicted does overall, but at the end of the day you could do a lot worse than this, and as deathcore goes, it’s a quick, largely painless fix. Though ‘quick’ and ‘painless’ may not exactly be the adjectives that Chelsea Grin were striving for here.

For fans of: Suicide Silence, All Shall Perish, Thy Art Is Murder
Words by Luke Nuttall

‘Self Inflicted’ by Chelsea Grin is released on 1st July on Rise Records.