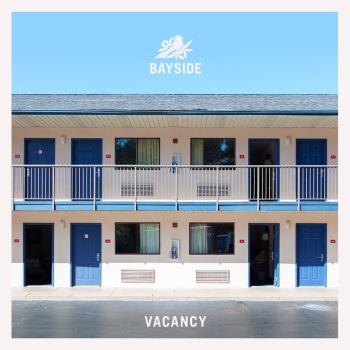 Bayside are practically old-timers in emo, having released seven albums since 2004. And while a new breed has overtaken the genre, they’ve proven themselves as one of the more consistent bands in the game. It doesn’t seem like they’ll be slowing down any time soon, either – singer Anthony Raneri certainly hasn’t had a shortage of writing inspiration lately, having recently been through a divorce.

New album Vacancy is very much more of the same, except Raneri’s heart is definitely superglued to his sleeve rather than just placed on it. Deeply confessional lyrics like “I was positive the hardest part was through / After six records and two marriages I’m still here paying dues” are the nucleus of the record, especially seeing as their original angular rock sound has evolved into a slightly more diverse form. Sure, all the familiar charisma of Bayside’s music is still present, but the piquancy present in their early records has been replaced by a softer approach and emergence of subtle theatricality. Full band efforts are regularly embellished with jaunty piano accompaniments (and what sounds like a harpsichord at one point), and the record has a tendency to flit between brooding and a joviality reminiscent of Weezer at the drop of a hat. The likes of I’ve Been Dead All Day and Mary are two of the happier cuts, but chirpy and irresistible as they are, their effect is pretty insignificant. It’s a shame as brilliant opener Two Letters sets a bar and none of the ten tracks that follow meet it – there’s definitely a sense of waiting for competition hanging over a listen to this album.

But while ‘inoffensive’ is a good word to describe Vacancy (there’s a significant dip in quality in the record’s second half where songs start to blur together), what’s present on it is certainly an enjoyable listen. Raneri is a dead ringer for Death Cab For Cutie’s Ben Gibbard vocally aside from a few raspy moments, and it’s a welcome change from nasally, over-Americanised voices that flood the scene right now. In fact, a lot of this record manages to give off a raw, early ’00s vibe without making it feel like you’re listening to Britney Spears on a Walkman. There’s so much here that could’ve gone wrong but Bayside make it work (for the most part, the vocals get a bit too whiny on Pretty Vacant) with passable songs and excellent guitar solos from Jack O’Shea and Raneri – one of which saves Rumspringa (Return To Heartbreak Road) from falling completely flat – which can only be commended.

A lot of Vacancy isn’t very memorable or groundbreaking, and it’s obvious how Bayside are on their seventh album without really breaking out and becoming huge in the scene. But it will definitely keep their consistency title next to their name and keep them up there with the most reliable bands in their genre.

For fans of: Say Anything, Motion City Soundtrack, Death Cab For Cutie
Words by Georgia Jackson

‘Vacancy’ by Bayside is out now on Hopeless Records.