Skip to content
EP REVIEW: ‘Never Let The Devil In’ by Lullaby
EPs

EP REVIEW: ‘Never Let The Devil In’ by Lullaby

﻿It can be difficult to know how to judge a band like Lullaby. At a time when more conventional alt-rock remains heavily saturated, it’s both unfair to deem a new […] 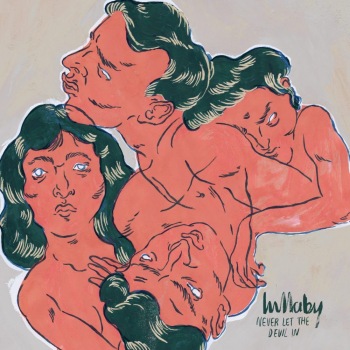 It can be difficult to know how to judge a band like Lullaby. At a time when more conventional alt-rock remains heavily saturated, it’s both unfair to deem a new act’s worth merely by the company they find themselves involved with, of which they have no say in the matter, but it’s also impossible to take them in a vacuum and not contextualise any views within their own genre.

As for Lullaby specifically though, their debut EP Never Let The Devil In might be an even stranger case again, as it’s easy to pinpoint the scene that they would thrive in (in this case, the indie-adjacent area occupied by acts like Wolf Alice and VANT), but they’ve actually got their own personality that works wonders for them. Even then it’s hard to pin down exactly what that is, as this is a pretty lean, straightforward EP; A Lie has a nice scuzzy snarl to it to open the EP on a strong foot, while Speed‘s rolling drumwork offers a buildup of momentum that’s jaunty but never saccharine.

In reality, where Lullaby stand out most is twofold; the first is Lewis Knagg’s vocals which remain underplayed and stay fairly solidly in a lower range without coming across as the dejected, too-cool-to-care fare that most indie frontmen seem to favour. That also feeds into the second point in fact, in that Never Let The Devil In is seeped in Britpop and first-wave Britrock influences for some rougher takes on melody that typical polished alt-rock, like the fuzzed-up Feeder half-impression on Why Don’t You Love Me. With the exception of the rumbling, almost tuneless bass of the title track that finds these influences pushed to their least-favourable extreme, Lullaby’s playing with looser, less-restricted tones gives Never Let The Devil In some flavour that any more polished would’ve inevitably stripped away, and even though it’s still not the most dynamic sound in the world (the primary downside of drawing from a sound that also has that problem), a bit more meat gives Lullaby something more to work with that they previously wouldn’t have had.

Even so, Lullaby still feel like a work in progress at the minute. Even though they appear to have a clear direction and sound in mind, they could still do with finding a real identity to push them over the top, rather than just milling around the “could be” slot. But that said, Never Let The Devil In is a promising indication of where this band are heading next, and one that builds a concise image of the sort of band they want to be. This isn’t the finished article by any stretch, but Lullaby are at least on the steadiest path possible to getting there.

‘Never Let The Devil In’ by Lullaby is released on 20th October on SHED Records.