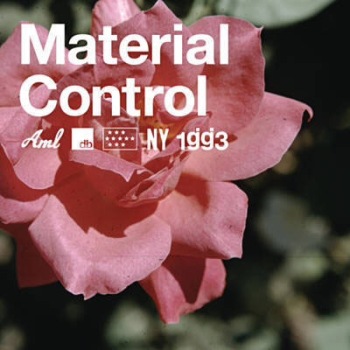 Of all the unexpected returns to happen this year, this is perhaps the most significant one. As maverick as At The Drive In and Brand New have been in the past, there’s at least been the suspicion that new material from both in time; with Glassjaw, even that’s been off the table for some time. Between the fact that it’s been fifteen years since their seminal sophomore album Worship And Tribute, and the relatively recent instances of focusing heavily on their 2011 Coloring Book EP at live shows, expecting Glassjaw to abide by the typical album release schedule, not to mention the sonic distance that Daryl Palumbo his built up with both Head Automatica and Color Film. And yet, Material Control sees the post-hardcore giants returning from the ether with little warning, with The Dillinger Escape Plan’s Billy Rymer tracking drums and looking to brush off the ennui that would typically come from a decade-and-a-half gap between albums.

Fortunately, Material Control manages to instantly grasp what a great comeback album should do – it remains discordant and dissonant in a way that Glassjaw have often made their own, but the progression is similarly noticeable, with the main tone now being one of discomfort rather than anger. The imagery is stark, and fed through the broadsides of shira and bibleland 6 (not difficult to work out where the latter’s views fall), it makes for a volatile, uncomfortable listen. It’s a feeling that’s exacerbated by Palumbo’s striking delivery, free of most conventional cadence and metre that almost always gives the impression of falling away from its own equilibrium in a strikingly off-the-cuff manner.

That’s more of a feature than a flaw, mind. Glassjaw have regularly been a band for whom conventionality is little object, and to see that they’re refusing to deviate from that this deep into their career already puts them a leg up against a fair chunk of other comeback albums. There’s a visceral quality to Justin Beck’s off-kilter guitars on new white extremity and the razor-edged closer, but where Material Control really becomes its fully-formed best is when the guitars take a back seat, like on the droning organ and tribal percussion of bastille day or the deliberate percussion of the title track, where the guitars do actually resurface as ragged, caustic shreds. Even as interludes, there’s a genuine sense of danger and dread that Glassjaw have imbued into this album, pulling out a heady atmosphere that still remains feral. It’s frankly difficult to really describe how this vibe is created, but it’s imperative to how Material Control functions, one that’s undoubtedly crucial in how kinetic and fast-paced it is, but without being ephemeral or forgettable. There’s a sense of intensity to this album that’s demanding, but really is easy to get swept up in.

But that’s just Glassjaw in a nutshell. In reality, Material Control isn’t that much of a deviation from what this band have offered in the past, but that’s ultimately where the appeal comes in. This isn’t a band who’ve mellowed unnecessarily with age or shilled out their viciousness; this is as powerful and intense as this band are fully capable of, and even if some of that has been repurposed here and there, the end result of a simultaneously crushing and intellectual album is still the same. For as touch-and-go as a proper Glassjaw album may have seemed for the longest time, the fact that Material Control has as much to dig into as it does makes the wait just that bit more worth it.

For fans of: Refused, At The Drive In, Deftones
Words by Luke Nuttall

‘Material Control’ by Glassjaw is out now on Century Media Records.