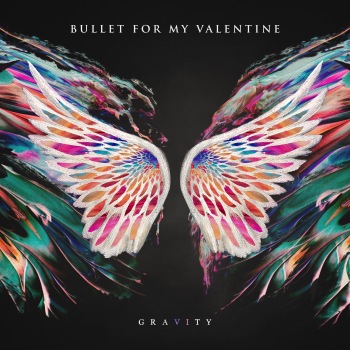 As it stands right now, Bullet For My Valentine’s star has not so much fallen as come crashing to the ground in a blazing inferno. A lot of the blame for this does rest on 2013’s Temper Temper, an album that honestly doesn’t deserve the intensity of the hatred that it gets, but with bad production, sub-standard writing and a generally anaemic sound, it was a far cry from what had seen the band blossom into such an enormous force. Venom was a definite improvement two years later in a return to a more conventionally metal sound, but over time that’s seemed more like a calculated attempt at damage control as opposed to any real improvements. And to many, that’s soured the opinion of Bullet For My Valentine considerably, finding it all the more difficult to cling to the sort of quality that was once expected from them, and for the biggest British metal band since Iron Maiden, the disappointment is all the more understandable.

So, to many, Gravity is a crucial album for Bullet For My Valentine, one that will reveal whether they’ve been able to reassemble a career in tatters, or stall out yet again as they’ve done for the past two albums. Unfortunately, this is much closer to the latter, with any impetus to create being sapped away to leave an empty, bland husk of an album. And given that this is the third time in a row this has happened, it paints a worrying picture about the state of Bullet For My Valentine nowadays, pretty much nullifying any hopes of them returning to the glory days.

Once again, a lot of that comes from the seemingly compulsory new feature they’ve tried that’s the album’s main selling point (for lack of a better term), and after Temper Temper’s forays into accessible hard rock and Venom’s cynically-viewed return to metal, this time they’ve offered the slick, electronically-aided production that modern metal has used as a crutch for far too long. Suffice to say, it doesn’t work here either, and the majority of possible colour and fury that could’ve been here is totally absent. It’s nice that a bit of aggression manages to peek through on Over It and Don’t Need You, but they’re as fleeting as glimpses get, and aren’t exempt from the production job that does them no favours whatsoever. At least the vision with this is clear, with the intentions to expand the cinematic qualities of their sound even further and appeal even more directly to the arenas they fill (or at least used to), and in terms of isolated choruses to mindlessly scream back, Gravity easily hits its quota. But there’s no way around how underweight and wishy-washy everything around it sounds, whether that’s the swathes of blank electronics that block out any discernible shredding on Under Again and Coma, the botched attempt at a Bring Me The Horizon-style electro-ballad on The Very Last Time that feels totally out of this band’s depth, or the blantant AutoTune over Matt Tuck’s vocals on almost every track. Coupled with an environment with barely any instrumental distinction – never mind the room for new drummer Jason Bowld to convincingly show what he can offer – and this is the most anonymous album Bullet For My Valentine have ever released by a country mile.

Tuck’s writing doesn’t help there either, and while he’s never been a fantastic lyricist, Gravity somehow manages to dip beneath even that low benchmark. And it’s tough to know where to start here, seeing as, across the board, these lyrics seem to have been pared back even further to match this new, truncated sound. Thus, we get tracks like the frankly pitiful faux-angst of Letting You Go, or the space-filling “whoa-oh”s of Not Dead Yet, presumably only there as attempted leverage to claw back to the status of arena mainstays that’s slipped them by. Again, Bullet For My Valentine have never been lyrical powerhouses, but their past work seems positively Shakespearean compared to how embarrassing they can be here.

And that’s an absolutely crushing thing to say, because it wasn’t really that long ago when Bullet For My Valentine were the cream of the crop when it came to modern British metal. But now, they’re a shadow of what they once were, sounding tired and desperate to get out of their state of unpopularity, so resorting to putting out whatever they can until something sticks. To be blunt, it hasn’t worked with Gravity, easily their worst album to date and the third in a depressing trend of a once-great band watching their legacy crumble before them. At this point, is it even worth hoping the next one will be better?

For fans of: Bring Me The Horizon, Thirty Seconds To Mars, Escape The Fate
Words by Luke Nuttall

‘Gravity’ by Bullet For My Valentine is released on 29th June on Spinefarm Records / Search And Destroy Records.