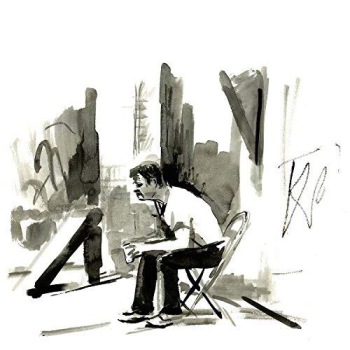 The idea of the side projects of Warped Tour alumni has become just as predictable as the bands themselves. Pop-punk and metalcore bands will indulge in pop and indie projects to fill time, and inevitably become just as interchangeable as the dayjobs themselves, only because nothing ever changes in them. God Alone, though, looks to be totally different on surface impressions alone, the new band of The Devil Wears Prada’s Mike Hranica and Kyle Sipress that, from its name and artwork alone, looks to embrace something much darker and more foreboding than another garden variety metalcore-goes-pop attempt.

That’s a fair assumption too, given how heavily Bent Shoulders veers away from those norms in its indulgence of post-punk and noise-rock tones. It’s significant how well this is pulled off too; for as recognised as metalcore forerunners as The Devil Wears Prada are, to see such a sharp turn performed to this extent has a lot of mileage. It’s easily identifiable as a side-project, what with its general haphazardness and feeling of having less time overall than would usually be awarded to The Devil Wears Prada’s newest venture, but that’s where a lot of the appeal comes in. Take a track like Tiny Bantam with Hranica’s sneering drawl, or Milk Drinkers with the woozy, lurching grind of the guitars, and how that instability manifests itself in a way that’s totally alien for those involved, while still being able to acclimatise remarkably well.

And sure, there might be some overcompensation, particularly later on with tracks like David that can’t help but feel like a rehash of earlier song templates in the feedback-sodden riffs and the deeply buried vocals, but at the end of the day, this is still done well, and manages to far surpass any expectations that may have previously been had. The fact that Bent Shoulders unequivocally won’t be for everyone makes it all the more enticing, a band reared in a notoriously stringent and safe scene branching out for something with real depth and creativity. Hopefully this won’t be the last we see of God Alone; they’ve build too strong a foundation to avoid using it more.

For fans of: ’68, Nothing, Cloakroom
Words by Luke Nuttall

‘Bent Shoulders’ by God Alone is released on 20th July on Rise Records.