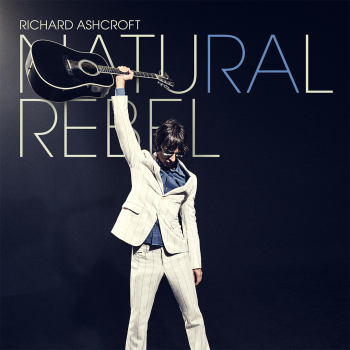 In a context wider than the success he achieved with The Verve, Richard Ashcroft – like many of his contemporaries without the surname Gallagher – has stood as part of the Britpop furniture and little else. Yes, Urban Hymns is frequently considered a classic album, and Bittersweet Symphony will undoubtedly stand in the indie pantheon for the rest of time, but beyond that, Ashcroft’s career has largely relied on inertia to prop up albums that really haven’t lasted beyond the initial release. It’s hardly a shock – again, the Britpop fallout has not been kind to most – but it’s the fact that Ashcroft’s career has just kept going with seemingly no interest that’s ironically made him stand out. Even with Natural Rebel, an album that seems to be getting startling levels of hype in the run-up to its release (probably because of the tried-and-true method of Ashcroft’s offhand comments about literally anything simply to take up column inches), unless this is a true, unrequited classic in the making, it’s just going to meet the same fate as so much of his output.

And realistically, was the trend perpetuated by flabby, flaccid sighs of albums from Feeder and both Gallagher brothers over the last few years ever going to be broken by Richard Ashcroft of all people? And indeed, for an album called Natural Rebel, it’s about as placid and unadventurous as these sorts of albums get, music made for Mojo and Q Magazine readers who want to return to “music’s golden age” without being challenged or diverted from what they’re already familiar with. On this evidence, Ashcroft is more than happy to oblige, though given how comparable to Liam Gallager’s As You Were this is, both in execution and intent, that’s no surprise. At least Ashcroft has a penchant for greater instrumental lushness and variety at points, and that helps the bluesy strut and programmed drums of Born To Be Strangers and the frankly beautiful suppleness of the strings and country-influenced strums of Birds Fly to connect on a deeper level.

It’s hardly manageable though, and that causes Natural Rebel to dip into dreary colourlessness far too often. It doesn’t help that’s in almost every facet of this album’s construction either, with the production being perhaps the least egregious in its open, empty-room swell that lacks a lot of body (particularly when acoustic guitars are concerned) but rarely makes any tremendous impact either way. Ashcroft himself, on the other hand, is a considerably more disruptive presence, with an unflattering drawl that only feels a bit less honking than Liam Gallagher’s, but on the likes of Surprised By The Joy and A Man In Motion, feels supremely inelegant amidst the more spacious arranged instrumentation, and not helped by lyrics that more or less dissipate on impact. Put it all together, and Natural Rebel is just a profoundly uninteresting listen, bogged down by next to no momentum – especially in the second half with cuts like We All Bleed and Streets Of Amsterdam that feel like they don’t know the meaning of the word “urgency” – and unnecessary attempts at stretching it all out with extended passages that only act as extra padding on an album that’s already devoid of meaningful content.

None of that is exactly a shock though, especially when, again, this has all been done in the last few years by the midlife crisis sufferers looking to make their return with the same mediocre results. It’s not like Natural Rebel is the worst of them either, as Ashcroft just feels more anonymous than genuinely terrible, but when there’s barely more than a handful of moments that stick beyond the initial impact of this glorified background music, that’s hardly a good sign. Ultimately, to anyone but the most dedicated of Ashcroft and The Verve fans, this will just feel like a waste of time.