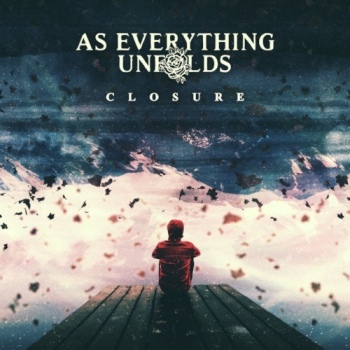 Closure is the new EP from As Everything Unfolds following on from last year’s Collide. The post-hardcore / alternative sextet from Buckinghamshire are also embarking on a tour with alternative rockers THISCITYISOURS throughout October.

As Everything Unfolds create dynamic sounding tracks; the effective layering of different instruments and inclusions of a variety of tones and textures adds a great amount of depth to their sound. The EP opens with 17:10, a strong track that establishes their sound. A catchy opening riff establishes the high energy of the track. Deep, booming bass adds a heaviness similar to the tone used in the tech-metal genre. Charlie Rolfe’s vocals and the synth melody line fill out the upper layers of the track without over powering the bass lines. Combing clean and harsh vocals complements the textures of the instrumentation and the bass drops are a great edition emphasizing the dramatic atmosphere. Despondency has more dissonance in the main the riff and the vocal style creates an overall more aggressive atmosphere. This track continues the high energy levels of 17:10 but explores different textures. The chorus is more simplistic with the instrumentation placing the vocals in the spotlight. Including more chord sequences and fewer melody lines across the instruments creates a good contrast to the first track and shows variety in their songwriting styles.

Divided, featuring THISCITYISOURS vocalist Sam Stolliday, opens with a cleaner repetitive guitar motif that creates a break from the heavier sounds of the earlier tracks. It initially appears to be heading down the alternative rock route but soon the heavy bass line, that appears signature in As Everything Unfold’s sound, soon comes through. The addition of Stolliday’s harsh vocals introduces another texture to the track; the tone of his voice complements Charlie’s, though his part in the track feels somewhat lacking, and his vocals could be used on more occasions in the track to take the sound even further. You Will Be is fast-paced and full of energy, with the orchestral-string style synth used creating a sense of fast movement underneath the rest of the instrumentation and the vocal line. The sparse bridge section with reverb vocals, percussion and a short guitar motif introduces an interesting change to the layering of the track. It also enhances the atmospheric effective of distorted guitars and synths re-entering. Backing vocals in the chorus are fairly quiet and subtle and yet they lift up the lyrics massively. Centuries ends the EP with a bang. The opening bass is not unexpected, the more aggressive pre-chorus is. The inclusion of more harsh vocals creates a strong sound and is good to see after only receiving short sections in the previous tracks; ending the track so suddenly leaves the listener wanting more.

As Everything Unfold’s have produced a solid EP. Effectively using each instrument in each track to create atmospheric and detailed sounds, they really show off their song writing and performance skills. It will be great to see where they go next.

For fans of: Bring Me The Horizon, Our Last Night, Dream State
Words by Holly Royle

‘Closure’ by As Everything Unfolds is released on 19th October.