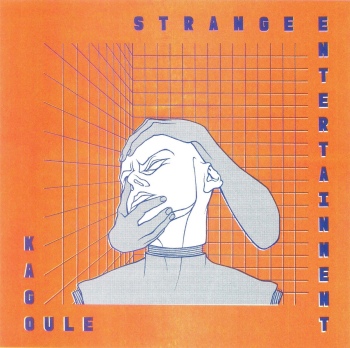 Even if they’ve rarely been given a serious push outside their own scene, there’s a lot of reasons to be excited about Kagoule’s second album. The most obvious one is the quality of their debut Urth, which, within indie-rock and post-punk circles, picked up a lot of steam for its ramshackle charms and ‘90s fixations that always go down well, particularly when utilised as quickly and smartly as they did. As for Strange Entertainment though, the move to Alcopop! is an immediate seal of quality right away, and while recording and mixing from Hookworms’ vocalist Matthew Johnson and Spring King frontman Tarek Musa respectively are a bit more contentious in that regard, the fact that Kagoule are broadening out to work with such widely-revered figures can’t be denied as a positive sign of where they’re heading.

But upon listening to Strange Entertainment all the way through, it’s difficult to make a proper judgement on those grounds. This is most definitely a different stripe of sound for Kagoule, essentially shedding most traces of grunge from their previous effort for weirder intricacies to accentuate the post-punk side to its most extreme level. It’s an interesting move to make, especially when that was such a core part of Kagoule’s sound, and going by Strange Entertainment, it doesn’t feel as though it was for the best either. Sure, this fiddly, more finicky side of their sound has compelling moments, but like a lot of math-rock with which this album shares a considerable amount of DNA, it lacks some stability to have more of an impact. A track like Egg Hunt is a prime example, with spindly, scratched guitars forming the basis of the track without being able to land that deeper punch. It can feel like prioritising obtuseness over workable songcraft, and when a good deal of this album can run together or just feel plain anonymous as a result, Kagoule’s efforts soon feel valiant but unheeded.

It says a lot that Strange Entertainment hits its peak when dispensing with the overemphasis on weirdness and simply sticks to what’s become a tried-and-true formula for Kagoule, only this time feeling a bit tighter and more refined. The likes of Superhuman and Repent! Said The Insect Man have enough of an off-kilter lurch without sacrificing a thicker, more direct punch, while Monsieur Automaton directs its noisier post-punk into more melodic, even brighter directions that feel right in this band’s wheelhouse, while still keeping a fair distance from being outright mainstream. These are moments that show Kagoule at their best, with a thicker production style to keep them steady and complement Cai Burns as a vocalist with his raspier, nasal tones. When Kagoule land in this more comfortable territory, the results are noticeably better and have that more substantial presence that an album like this should ideally hinge on.

And that does feel like a good balance overall, particularly when Strange Entertainment can be pinned down as a more transitional album. Kagoule definitely have some good ideas that they’re working with, but they’re struggling to execute them the most efficiently or effectively, and that’s ultimately what this album’s biggest downfall is. When all the pieces come together, however, it averages out as a success overall, mostly because Kagoule are interesting enough as a band to hold the listener’s attention, even if product isn’t as great as it could be. Still, they’re making steps towards new, and hopefully they can set their course a bit straighter to reach the best, most desirable outcome.

‘Strange Entertainment’ by Kagoule is released on 26th October on Alcopop! Records.