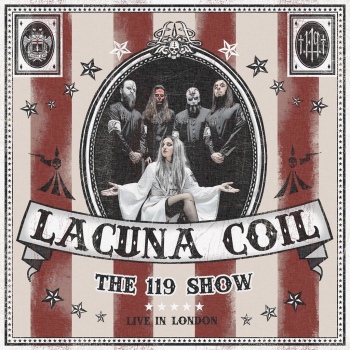 London’s 119 Show took place on the 19th January 2018, celebrating twenty years of Lacuna Coil. The Italian metal band formed back in 1994 initially named as Sleep Of Right and briefly as Ethereal, before settling on Lacuna Coil. Their sound has evolved over the past two decades, developing gothic ideas in their lyrics and music; “We never thought we’d get to this point,” beams co-vocalist Cristina Scabbia.

The show itself, available on DVD as part of the release, is incredibly dramatic with a visual enticing stage in the style of a gothic circus. Along with each band member dressed as equally dramatic for their setting. The focus on the visual aspect shows how significant the performance aspect of the show was for the band – they really wanted to do something different to mark the occasion and the theatrics help to achieve this.

The 119 Show covers all of Lacuna Coil’s eras throughout the last two decades. The first full track performed, A Current Obsession, was originally released on their 2001 album, Unleashed Memories. The textures of Cristina’s and Andrea Ferro’s vocals have clearly strengthened since the release of that track all those years ago. The developments in their vocal styles are particularly displayed on their more recent tracks. Blood, Tears, Dust originates from their eighth studio album, Delirium, released in 2016, the album which saw Lacuna Coil develop heavier, dark tones and textures in their music, and ideas exploring mental illness in their lyrics. The performance of this track at the 119 show sees Andrea’s harsh vocals taking centre stage, with his harsh vocals in particular growing significant stronger over the years, and Delirium really emphasises this. The depth of sound from the distorted guitars and bass is huge, the texture has a raw edge in comparison to the recorded version of the track which is mixed to blend the guitars and bass into a heavy wall of sound. This edge gives the live performance an extra theatrical aspect, which accompanied with fire displays, creates something fantastical.

Swamped also benefits from the distorted raw texture of the guitars from the live performance. Taken from their 2002 album, Comalies, this track merges heavy instrumentation with more interesting vocal melody lines. Cristina’s vocal melody line includes influences of Oriental scales which lifts the more simplistic instrumentation to create a good track. Her live vocals come through flawlessly. As well performing a range of tracks from across their albums, Lacuna Coil chose to play some tracks that they haven’t performed live very often including The Army Inside. From their 2012 album, Dark Adrenaline, this track is energetic with a fast percussion and chord changes. This creates a change in the atmosphere of the show which had been quite dark and heavy up to this point. The rhythm of the verse is energetic creating a sense of movement. The lyrics for this track are fairly simplistic compared to some more complex ideas involved in other tracks, but like the change in rhythm, it makes this track more accessible and forms an effective change in-between the moods of their tracks in this setlist. The personal meanings of this performance are displayed in their track, One Cold Day. This is dedicated to the late Claudio Leo, who played with the band from 1995 to 1998 and passed away in January 2013 and featured on the Broken Crown Halo album released in 2014. The heartfelt lyrics, and sombre instrumentation give a great performance and mark the fact that this was a difficult period in Lacuna Coil’s history.

I Like It, from Shallow Life, remains one of their most popular tracks with over 20 million views; the live performance of this upbeat, fun track gives the 119 show a party atmosphere. The movement from the audience reveals their enjoyment of the track. This track is a further example of their diversity as a band. Lacuna Coil’s ability to write a range of tracks from the gothic, to heavy metal and lighter more upbeat tracks. This factor contributes to their success and why they have reached the twenty year mark – a celebration many bands don’t reach. Heaven’s A Lie blew up when it was first released in 2002 as part of the Comalies album, and all these years the later, the live performance shows the bands maturity since its release. Cristina’s vocals sound far stronger from the original recording. The live guitars form a solid instrumentation that suits the performance but hasn’t drastically changed from the sound of the original recording. I Forgive (But I Won’t Forget Your Name) is another well known track by the Italian metallers, with the live performance deviating from the original as Cristina sings the chorus a third lower than the original, with the original vocal line as backing. This creates a nice harmony effect and adds extra texture to the track. As this is towards the end of the 119 show, striving to reach the high notes might have been too much considering how much stamina is needed for performing live vocals. Enjoy The Silence is the penultimate track. Originally by Depeche Mode, Lacuna Coil included this cover on their fourth studio album, Karmacode; this track goes down well with the audience and appears to be a clear favourite as the crowd performs the final verse.

The 119 Show draws to a close with Nothing Stands In Our Way, and its distorted, heavy sound gives the show a theatrical finale. This track is also very apt as Lacuna Coil have come so far over the past twenty years, and it will be great to see where their next chapter leads them.

For fans of: Within Temptation, In This Moment, Epica
Words by Holly Royle

‘The 119 Show – Live In London’ by Lacuna Coil is released on 9th November on Century Media Records.