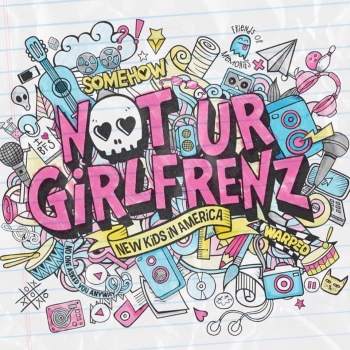 It’s more or less impossible to go into a discussion about Not Ur Girlfrenz without first addressing the colossal elephant in the room, namely that the ages of this trio range from twelve to fourteen. It’s the inevitability of being in a successful band so young that age will overshadow accomplishments, but currently, they’re no slouches in that department either. For one, their slot on the final run of Warped Tour this year earned them the accolade of the youngest touring band in its 24-year history, and with Bowling For Soup frontman Jaret Reddick serving as both their mentor and producer, they’re at least being ushered into the world of all-American power-pop by capable and experienced hands.

It’s actually quite appropriate given the sonic DNA that Not Ur Girlfrenz share with Bowling For Soup (or, perhaps more pertinently, The Dollyrots), and while their age does excuse some of the sugariness and general air of immaturity, it’s still not something that totally lands. Granted, that’s not exactly the fault of the band, rather the limitations that are naturally baked into the sound, but when things like the questionable rapping on the title track are allowed to slide through, it’s clear that New Kids In America is the work of a band who still need a good deal of seasoning before they can really shine.

That’s not to say that there’s nothing about Not Ur Girlfrenz that stands out, because even now, they’ve got the makings of a perfectly competent band, especially when given the chance to fully break out their music talent. As expectedly juvenile as Friends Or Memories can come across in the content, the darker, meatier guitars betray a band quick to move out of the bubblegum pop territory they may be unwillingly burdened by, and it’s a good fit for them, particularly when Liv Haynes hits on areas of pop-punk snottiness that really suit her. At its core, there’s a good band waiting to break out of this EP, and even if it can fall into the quirkier trappings of the scene they’ve been thrust into, it’s easy to see they’re quicker to embrace them and tailor them to their own age and experience. It’s probably why they get more of a pass than so many others; there’s natural naivety that feeds into their writing on tracks like No One Asked You Anyway, and that’s a strong selling point, at least at this stage. Of course, moving further down the line, it’d probably benefit them to abandon some of the less-admirable qualities that this EP displays; there’s a saccharine, mid-2000s quality to the production that can really grate in a hurry with the wrong material, and paired with the ballad Somehow which tips a bit too far into Disney Channel territory, it’s an outcome that’s expected but hardly appreciated.

Even with all that though, Not Ur Girlfrenz are displaying some good early steps here that they seem to be building on with relative ease. It won’t blow any minds (as their affiliation with Bowling For Soup should provide an early indicator of), but for what it’s trying to achieve, New Kids In America feels like it taps into that vein of younger, goofier pop-punk with enough exuberance to hit its mark. There’s definitely work to be done, but when a band as young as they are (both individually and as a collective) have made something as perfectly listenable as this, it’s easier to look at the blanket positives beyond anything else, and there’s certainly enough of those here.

For fans of: Bowling For Soup, The Dollyrots, Avril Lavigne
Words by Luke Nuttall

‘New Kids In America’ by Not Ur Girlfrenz is out now on Frenzone Records.