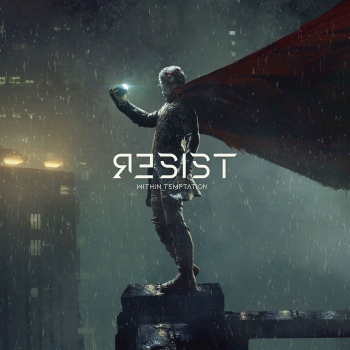 Dutch symphonic metallers Within Temptation have gained the position of one of the genre’s leading bands. Their sound has evolved over the years; with more folk influences early in their career, ’80s pop styles in their album The Unforgiving, and a further development into industrial and electronic touches with their previous album Hydra. Four years after Hydra, Resist marks the beginning of a new chapter as they move into dystopian themes and a more defined sound.

The Reckoning opens the album and is, by now, well known having been released back in September 2018 as the first single for this album. Featuring Jacoby Shaddix of Papa Roach, this set the album as following in the same footsteps as Hydra. However, the power behind the unforgettable synth riff, the strength of the distorted guitars and dynamic vocals from both Sharon den Adel and Shaddix place this track as one of, if not, their strongest tracks to date. This track establishes the dystopian atmosphere that runs through the album. Raise Your Banner featuring In Flames’ Anders Fridén is another strong track that merges the high energy levels, synth riffs and guitars of The Reckoning, with more recognisable symphonic metal elements. The presence of choral backing vocals, piano melodies, strings and an operatic final verse merge the traditional Within Temptation with the new incarnation. The only area in which this track is lacking is the contribution from Fridén; he has a small number of lines in this track and is often lower in the mix. If the ration of contribution matched that of Shaddix in The Reckoning, his presence would have a greater impact in the track and enhance the harsh edge his vocals bring. Mad World contains yet another unforgettable synth riff and catchy chorus. The verses of this track are more sparse, creating an effective juxtaposition. The inclusion of an oriental melody in the pre-chorus adds an extra something to the track that prevents it becoming a structurally generic sounding track.

The Reckoning brings a greater emphasis on pop influences. The Unforgiving and Hydra both introduced this style into Within Temptation’s sound, but Resist takes it further. Supernova features a bright bouncy synth sound with operatic backing vocals, and strings in verse drawing the track into the symphonic metal genre. The song’s structure is quite simple and the chord progression in the chorus is in the pop style. The presence of a heavy bass line contrasts the high tone of vocals and synths creating a full, atmospheric sound. Within Temptation include a link to their Mother Earth album with the inclusion of a male choral section in bridge, similar in style to their early record. Holy Ground also includes features of the pop genre. Adel’s vocal style conforms to this genre link with soaring chorus vocals and more staccato style, fast vocals in the verse. This seems a little strange at first with her vocals being quite different to her usual style with Within Temptation. The interlude pop solo project Adel undertook prior to Resist has most likely contributed to this, and brings a fresh take to their work and the symphonic metal genre in general.

This album has a strong continuity, however it must be said Firelight brings a different style to the album with its slower tempo and more soulful feel. This track appears a somewhat out of place alongside the high energy and synth heavy tracks. The strong backing vocals in the verse create a dramatic atmosphere and the track feels quite emotional. The addition of Jasper Steverlinck’s vocals compliments the sound as his vocals have a smooth texture and blend well with the instrumentation. The presence of harsh vocals would greatly disrupt the feel of this track. The contrasting full sounding chorus and sparse verse sections enhance the track, but it does feel lacking in contrast to the rest of the album. Mercy Mirror also feels somewhat sparse. The synth lines don’t fill out the sound of the chorus as they do in other tracks. The acoustic guitar and strings mixed into the verse give a different sound from the other tracks, but it lacks the drama and theatrics present in the early half of the album. This being said, the presence of these tracks does add diversity to the album and a full track list of synth heavy tracks could run the risk of becoming repetitive. These two tracks appear to be the calm before the storm as Trophy Hunter brings the album to a dramatic conclusion. The marching rhythms of the bass lines and guitars enhance the dystopian theme. The chorus has an optimistic quality contrasting the darker sounds of the verse. The use of brighter, high pitched synths and soaring vocals lifts the chorus. The ongoing djent guitar rhythm in the outro with added choral sections gives the track and the album a theatrical finish.

Within Temptation have produced a strong album. Following the experimentation and development with their previous albums, Resist shows the band are strong and comfortable with their sound and their new direction. The longer break between albums and Sharon’s solo project have clearly given the band a refreshing break allowing them to return in full force.

For fans of: Amaranthe, Delain, Epica
Words by Holly Royle

‘Resist’ by Within Temptation is released on 1st February on Spinefarm Records.