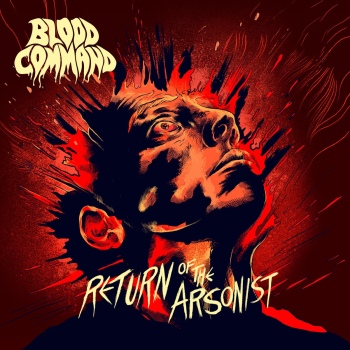 It feels as though there’s never been a better time for a band like Blood Command to really show what they can do. They’ve always been praised in the past – and praised heavily, at that – but it’s tended to come from those already in the loop or with more of an affinity for weirder sounds; now though, that sort of experimentation is very much the norm, and it gives bands like this the chance to really break out. Besides, it’s not as if Blood Command are fighting against the elements here, with clearly signposted pop influences breaking through and post-hardcore and art-punk shell for music that has that level of abrasion to it but is also ludicrously catchy. And thus, given that this is really their first opportunity to get their name out there in a major way, it makes sense to test the waters with an EP like this. Afraid Of Water has already been showered in adoration more or less to the same extent as all of their material, so a brief burst of the same calibre is the perfect way to get the uninitiated onboard.

And it really does feel like, if there was going to be a Blood Command release that serves to bridge the gap between where they are now and the modern rock scene that could see their profile increase exponentially, it would be Return Of The Arsonist. It being positioned as a sequel of sorts to their 2011 EP Hand Us The Alphamale feels especially inconsequential in this sense, not only because Blood Command have progressed so much as a band since, but also because there’s enough here for it to generally stand on its own merits. It there was any flaw to be found, it would be the truncated nature of these tracks that can lead them to feeling a bit throwaway; the longest runtime here is barely over three minutes, and dialing that down even further on a track like Ritual Knife which, at under a minute, feels like more of an unnecessary interlude, there’s a scrapbooked quality to the way this EP has been assembled that doesn’t necessarily work in Blood Command’s favour some of the time.

That being said, when Blood Command shine, their brightness is virtually unmatched. It’s probably the most fully realised their self-proclaimed label of ‘deathpop’ has felt here, as the snarling rhythms reminiscent of classic post-hardcore jostle with a bracing lyrical volatility and Karina Ljone’s sharp yelps, all while fed through the most airtight pop filter imaginable without even verging on sterility. The most obvious example is Afraid Of Water with rafter-shaking melodies that sound positively gigantic when paired with a bit more meat and muscle in the guitars, but in the surging, sweltering pop-rock of S01E02.Return.Of.The.Arsonist.720p.HDTV.x264 or the frenzied punk thrashing on No Thank You, I’m More In To Fake Grindcore, Blood Command balance on the knife-edge of pop crunch and rock experimentation almost perfectly. It helps that the EP in general is a kinetic as it is too; the scattered nature does push things back slightly, but the speed that Return Of The Arsonist pelts forward only adds one more thrill to a sound that Blood Command are already doing so much right with.

That’s why it’s such a shame that these ideas couldn’t have been developed into something with a bit more scope or larger presence; if this had been bulked out into a full album with the same consistent calibre as its best moments, Blood Command would have something truly transcendent on their hands. Even so, there’s more reason than ever to believe that might be the case next time, as Return Of The Arsonist really does feel like a band leading up to their strongest moment to date. At its best, these are among the best songs that Blood Command have ever written, and if that magic could be isolated and expanded on even more, that would be an incredible thing to experience.

For fans of: Marmozets, Refused, glassjaw
Words by Luke Nuttall

‘Return Of The Arsonist’ by Blood Command is released on 12th April on Fysisk Format.