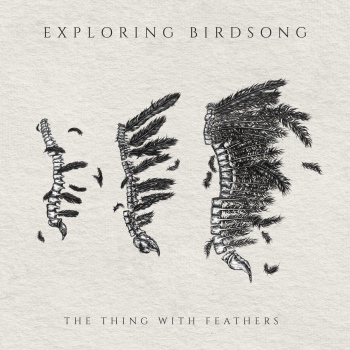 It’s rare to see a new band so defiantly earmarked for their originality as Exploring Birdsong. As much as the term ‘uncatogorisable’ is thrown around, it’s more out of hyperbole than anything else, and yet for the name that Exploring Birdsong have made for themselves already, eschewing guitars entirely for a distinctly unique, almost baroque take on swooping progressive rock, that does seem to be almost entirely accurate. Musical touchstones ranging from Rush to Florence + The Machine don’t exactly have connective tissue in abundance, but the trio’s previous singles have done more than a fair bit to justify those comparisons, and leaves a rather high watermark for debut EP The Thing With Feathers to hit. Exploring Birdsong’s ambition isn’t being tempered in any way here, and given what they’re capable of, there’s no real apprehension around whether or not they can hit it.

And while The Thing With Feathers does generally feel imbued with the growing pains of a new band cultivating something entirely their own, it’s still easy to see where all the right directions have been aimed for. In terms of shooting for such a high ceiling, there are very few concessions made for accessibility or tamping down the band’s own creativity, and even if that comes with a handful of bumps in the road in its own right, there’s nothing here indicative of a band overreaching or extending themselves beyond their own means. This feels like a perfectly reasonable jumping-off point for Exploring Birdsong to go even further, and when what they’re jumping from already brims with a level of experimentalism and dexterity far beyond that of other bands their age, there’s already plenty to be hopeful about here.

Even so, the slight caveats with that statement do warrant further examination, especially when they come together in what is not necessarily a flaw, but is the area that’s holding Exploring Birdsong back from really hitting greatness. It’s largely down to how free-flowing and self-evolving it can all feel, and while a track like The Baptism sees that done pretty well with the serpentine keys and Lynsey Ward’s tremendously clear vocals, other instances are less empowered by a lack of structure and struggle to break past it. To Exploring Birdsong’s absolute credit, keeping these songs at a relatively concise length all throughout is undoubtedly the best move to take, but the benefit of a clearer hook or more rock-solid melody would only be better in terms of creating a stable foundation.

But on the other hand, that can come across as over-streamlining an approach that Exploring Birdsong have been praised for leaving as it is earlier in this very review, and they still totally deserve that praise. Sonically, The Thing With Feathers really does hit in a unique way, as sinuous basslines weave within pianos and keys that have a fantastic command of both light and dark in their sound. Even with a rather limited instrumental pool, there’s enough done with it to really hone in on a sense of cinematic atmosphere that’s brilliantly realised, something which, in all honesty, the very loose, free-moving presentation does help to facilitate. What’s more, even despite the shortcomings that may come with it, that’s what gives The Thing With Feathers’ lyrical angle a lot more weight and punch, drawing from Seamus Heaney’s poem Bye Child about Kevin Halfpenny, a child raised in a henhouse for five years who was severely malnourished and unable to speak when he was found. Ward’s vocal performance lends a lot of emotive drive to that thematic well, but there’s further growth beneath the surface that strikes all the harder. It’s a suitably unconventional method taken on a release that’s just as left-of-centre, but Exploring Birdsong are able to mine a great deal of impactful and affecting material from it.

Really though, there’s no real instance in which The Thing With Feathers doesn’t stand out, at least in some degree. It’s a comfortable distance away from really anything in most current musical spheres, and with an execution that’s distinctly their own, it puts Exploring Birdsong in good stead to really accomplish something remarkable if they can just hone in what they’re doing a bit more. There’s not really that much to be changed on the whole; their foundation already has a lot to like about it, and they’re doing something with it that shows a readiness to break out of any boxes they might be put in with a fair amount of ease. Crossover success mightn’t be something on the cards, but that’s far from a criticism; making waves in the underground is just as legitimate, and that’s something that Exploring Birdsong are likely to be doing a lot of.

‘The Thing With Feathers’ by Exploring Birdsong is released on 29th November on Long Branch Records.