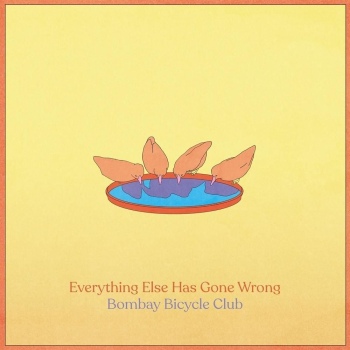 The shifting indie tides have never been all too considerate to Bombay Bicycle Club who, despite being beloved by their fans, haven’t been a significant presence within the genre in some time. It’s almost analogous to the demise of lad-rock which saw bands like the Kaiser Chiefs take a profound nosedive, except Bombay Bicycle Club’s degradation seems almost even more natural, like a band losing their footing as their straight-down-the-middle indie-pop has fallen away from the larger indie scene as a whole. It doesn’t help that it’s been six years since they actually released an album – not helped by the fact that was the generally underwhelming So Long, See You Tomorrow – but for a band who’ve never really had that big hit to their name that have defined so many of their contemporaries’ careers, coming back into focus with so little immediate advantage can be a risky move that the band don’t feel equipped to tackle.

And yet, there was at least an inkling that Bombay Bicycle Club were better prepared than this. After six years since their last album and with three of those being a period a hiatus, it’s not too much to ask for a band to at least sound like there’s been some formative, revitalising impact carried out in that time, and yet it feels like the complete opposite effect has been had with Everything Else Has Gone Wrong. There’s nothing impactful or lively here, as Bombay Bicycle Club dish out sleepy indie-pop cuts devoid of power, passion or drive, ultimately going in one ear and right back out the other, such is the nature of this album perfunctorily plugging whichever gaps it needs to in order to lazily limp past the finish line.

‘Lazy’ is certainly the key word when it comes to this album as well, in how ambition seems to be a foreign concept in songwriting with no sense of flair or depth. The onslaught of repeated words and lines on basically every track is the sort of artificial lengthening tool that’s more inane than effective, but when placed alongside the nonchalant vacuum that is Jack Steadman’s voice, there’s such a plodding, workmanlike quality to this writing that’s never exciting or powerful in the way it should be. There are moments that should be the sources of real triumph like the overcoming of creative stagnation on the title track or declarations of love on Eat, Sleep, Wake (Nothing But You), but the mumbled hollowness with which they’re delivered mingled with passionately derelict word choices fosters no sense of emotion or connection. It’s even truer when bigger swings are (apparently) made with Good Day and People People trying to build some form of social commentary, only to default to dime-store moralities about standing together on the latter, and sounding just as bored and unenthused as a lyric like “I would quit my job / If I had a job” appears on the former.

There’s nothing that’s even gained from any of this either; Bombay Bicycle Club sound as though they’re utterly phoning it in, and when the songs themselves are just as sluggish and undercooked, it’s hard to imagine what the end goal to any of this actually was, beyond getting an album out to once again establish some form of presence in the scene. But even then, that’s a failed goal here, as there’s so little to actually remember on Everything Else Has Gone Wrong. To give them the slightest bit of credit, there’s a nice clarity to the production that’s a neat conduit to an earlier time in indie-pop, and it’s something that the tight bass, percussion and buzzing synths of Is It Real can gel with to form the closest thing this album has to a highlight. And sure, the odd fragment of a nice melody might pop up here and there, but the level at which this album is underdone and squeezed down to the absolute bare minimum of itself is frankly ridiculous. Guitars primarily feel watery and lacking in any significant presence beyond what an okay crop of basslines can salvage, and that’s really the only instrumental description of note about this whole album. The slashing of pace and scaling virtually everything back to be as simmering and low-key as possible is as neutering a factor as it gets, and though it’s hard to say that this isn’t a well-played album, that lack of anything of note makes any such compliment effectively worthless. It’s easily the most forgettable album of the year so far, made all the noticeable when that’s its most defining feature, save for a few scant moments.

All of that results in the sort of thoroughly milquetoast and misguided listen that might even be pitiable if it wasn’t coming from a band who should know far better. For a body of work from one of indie-pop’s more recognisable names, it’s amazing to think how Everything Else Has Gone Wrong got to this stage without any sort of intervention, if only to ensure it wasn’t so thuddingly anonymous or at least gave the illusion of Bombay Bicycle Club caring about what they’re selling. Instead, this whole exercise just feels pointless, and that of a band royally squandering what could’ve been a big return for them on what’s by far their least impactful album, and what might just be their worst. There’s not a chance in hell that this will be remembered in a month’s time, let alone in the wider context of Bombay Bicycle Club’s career, and given the profound lack of effort that’s been put on display, that’s probably for the best.

For fans of: Mystery Jets, We Are Scientists, Darwin Deez
Words by Luke Nuttall

‘Everything Else Has Gone Wrong’ by Bombay Bicycle Club is out now on Mmm… Records.