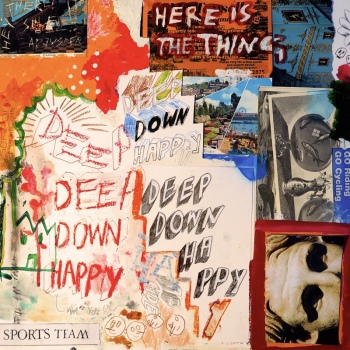 There’s no real reason that Sports Team are getting big now, or at the very least, it’s hard to see what reason there could be. That’s not even a criticism on the music either; you could go into Sports Team without hearing a single note, and just from all the promotion and coverage they’ve received thus far, you’d have the exact same opinion. Because it’s not like any of the media furore around this band is new, and in what seems to be the newest target of cavalier mix-and-matching of pull quote standards, there’s really nothing of note that can be gauged. They’re the latest recipient of ‘Most Exciting Band Ever!’ in what seems to be the billionth meaningless iteration of that, and a reputation for being gobby and putting on a good live show serves as the usual solidifying hold. Even beyond that though, a persona that can effectively be boiled down to six poshos extolling the virtues of middle England isn’t one that you’d expect the indie crowd to jump on in a hurry, and with a debut album whose release date has been passed around from pillar to post amidst the Coronavirus pandemic, there isn’t much that currently shines in Sports Team’s record to justify where their burst of hype comes from. That’s all superficial, of course, and Deep Down Happy could certainly stand on its own merits, but the number of flash-in-the-pan bands who’ve come around and gone through these exact same motions make that difficult to sit with initially.

But in truth, this is okay. Right now, Sports Team aren’t doing a great deal as far as future-proofing or guaranteeing some form of longevity goes, but in an indie-rock scene with an overall higher average of quality than it had a decade or two ago, even a fairly mid-tier listen like Deep Down Happy isn’t too bad. And even then, Sports Team do have enough about them to actively like, despite what they’re doing on the whole not being as enormous a force as it might be touted. Still, they aren’t sinking into the background which is definitely a good start, and the quality on the whole is enough to eke out a pass, albeit a pretty slim one.

Because if there’s a major point to be gleaned from Deep Down Happy, it’s that Sports Team have some significant ideas that they’re not quite well-versed enough in articulating yet. As far as sound goes, this is indie-rock with a noticeably English sensibility, and with the shades of post-punk that line the guitars and bass, Sports Team are clearly trying to cover all possible bases with regards to finding wider success within their corner. That in itself is pretty easy to appreciate, but it also reveals a lack of defined hooks on this album, something that would be ultimately important in keeping Alex Rice’s yelping, less constrained vocals in check. It’s clearly supposed to serve as a replication of the chaotic reputation they’ve picked up, but it means the album isn’t all that memorable and for a band in the indie-rock space whose conduit to mainstream stages is right in front of them, it’s what is mainly holding Sports Team back. On the flip side though, Camel Crew shows what they can do when embracing the powering gusto of noisier indie-rock like this, while Here’s The Thing and The Races feel tailor-made to be the crossover cuts that’ll see them through future festival seasons. The potential is definitely there, and on tracks like Long Hot Summer and Born Sugar, there’s a distinct compositional style to them that appears to want to break into more accessible territory, and actually sounds quite good when paired with a grubbier guitar tone like this. It’s just that any tightness that’s imperative in making this wholly work hasn’t been given a proper opportunity to work, and when the full effects of it can only be seen in a handful of moments across the album, the lack of longevity that’s been lingering around Sports Team for a while doesn’t seem unjustified, especially when they seem to be playing in the same creative ballpark as so throwaway indie bands throughout the 2000s. Sports Team are definitely a better band than that, and glimpses of inspiration across Deep Down Happy prove that, but that hasn’t been fully tapped into yet, and it leaves their output as a bit more hollow than it should be.

It’s understandable though, given that Sports Team clearly want to be a bit more unorthodox in their approach within indie-rock, and being a bit rougher and off-piste does on paper appear to be a worthy companion to a lyrical direction that’s a lot snottier and more irreverent than many of their peers. This works a lot better though, partly because Rice as a vocalist has the sort of permanently sardonic sneer in his delivery that offers enough levity to not be grating, and partly because lyricism and word choice is where Deep Down Happy thrives the most. The snideness on display is most palpable, from jabs at smug Tory students on Lander, a platitudinous way of living that has no bearing on reality on Here’s The Thing, lecherous Britain First ‘patriots’ on The Races and even HMLTD on Camel Crew (who Rice has once described as “one of the worst bands ever”), but it’s the literate lyrical style and penchant for dry humour that makes it all connect a lot more strongly. There’s something so inherently likable about a line like “I just wanted to be your mid-noughties MTV star” on Kutcher, and it’s that sort of knowingly clever wording that gives Deep Down Happy its strongest pedestal. It’s where the post-punk influence shines the most, and it presents a pretty compelling set of evidence for Sports Team to do well if they were to morph into a band like Idles or, perhaps more closely, Fontaines D.C..

It’s what makes it more difficult to simply dismiss Sports Team as ‘just another indie band’; there’s clearly more there that just needs time to grow before it reaches its apex. It’s encouraging to see, particularly on an album that feels as flawed and far from the finished product as Deep Down Happy is, and while there’s a good chance this one might slink into the background when it has contenders to deal with in the future among Sports Team’s catalogue, it remains a pretty good jumping-off point, and the ideas it lays down are solid, if nothing else. That’s why, despite its clear shortcomings, it’s still worth giving this album a listen, if only to see how clearly marked out the path forward is. As easy as it may seem to bundle Sports Team in with the new breed of landfill on face value, there’s more to them than that, and that’s good to see.

‘Deep Down Happy’ by Sports Team is out now on Big Desert Records.