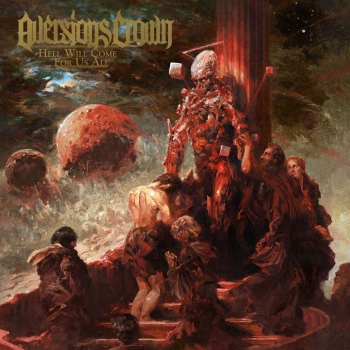 Hailing from Brisbane, the new album from Aversions Crown not only brings the next evolution of their sound but also sees their new vocalist, Tyler Miller, make his debut. Hell Will Come For Us All is a rather apt title for current times but let’s not focus on that just now. The album also features keys from Berry, keyboardist of the Danish melodic deathcore outfit Hanging The Nihilist.

Opening with The Soil, the technical deathcore act bring their intricate leads and powerful heavy tones in a wall of sound. The harsh vocals have a smooth texture to them and act as a means of combining the cleaner and more distorted instrumentation together. It works really well. The levels of the mix are particularly interesting as the vocals sit in the middle with the instruments rising up around them. This track, and the album as a whole, delivers an incredibly immersive sound through this. Aversions Crown introduce some fantastic drama in their breakdowns – both The Soil and following track Born In The Gutter see fierce breakdowns. The latter feels quite minimal in many ways with their use of the instrumentation, but it doesn’t feel lacking. The wall of sound still hits with immense force.

A number of references to deathcore releases including Fit For An Autopsy’s The Sea of Tragic Beasts album have been made, and it’s true that similarities can be found. However, this seems to undermine Aversions Crown’s progression in their music. This album has a strong sound with some distinctive tones and textures. The title track, Hell Will Come For Us All, delivers on the demonic heaviness. The slower tempo gives the perfect amount of space for the percussion hits and guitars. The consistent eerie guitar lead, mixed with the vocals, really gives the feel of hell coming for us all. The chord progression in the chorus is interesting; it intensifies the dark mood. The fast pace of Scourge of Violence elevates the energy levels and contrast effectively with the slower tempo of the previous track. It brings in a little oriental feel guitar lead that just adds an extra something to the track.

The ethereal backing synth in Sorrow Never Sleeps is truly haunting. This track draws together some great rhythmic sections across the instrumentation. The change in dynamics between the more minimal pre-chorus and full chorus enhance the atmosphere of the track. The Final Judgement is wonderfully theatrical. The high-pitched string motif is a really effective introduction to the track. The dark aggression in the vocals blends well with the fast instrumentation, and by including a demonic spoken section this track is given a twist. The marching snare drums provide an element of a ‘death march’. Suddenly dropping to the keys before erupting again sees the dynamics being manipulated to deliver a dramatic result.

Aversions Crown have produced a well-polished album in Hell Will Come For Us All. The vocals maintain power throughout, and the instrumentation has been well thought out to reflect the mood of each track.

For fans of: Fit For An Autopsy, Thy Art Is Murder, Shadow Of Intent
Words by Holly Royle

‘Hell Will Come For Us All’ by Aversions Crown is out now on Nuclear Blast Records.