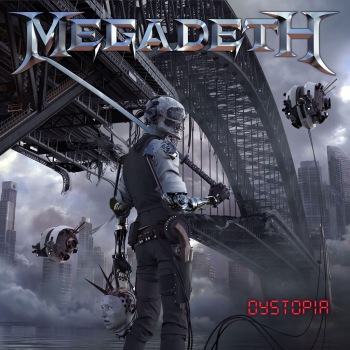 Being the best of thrash’s Big Four isn’t as commendable an achievement as it once was. Whereas Metallica, Slayer, Megadeth and Anthrax have each had their share of genre-definers with The Black Album, Reign In Blood, Rust In Peace and Among The Living respectively, right now a half-decent album is enough to put any of the four on top of the pile. And with Megadeth being, by a considerable distance, the most prolific of the group, there’s usually a hope that they’ll rise up to the challenge. Fortunately, after the disastrous Super Collider in 2013, Dystopia sees Megadeth rather quick to get back on the horse again with an album that’s actually surprising how decent it is.

That’s in large part thanks to the new blood that’s been injected into the band, guitarists Kiko Loureiro and Lamb Of God’s Chris Adler on drums. Their contributions feel like a true galvanising force towards Megadeth’s sound; whereas Super Collider‘s inescapable pedestrianism made it feel about as heavy and as metal as a sheet of tinfoil, Dystopia really feels as though they’re trying again. The likes of Death From Within and Post American World are prime examples – the former keeps an unrelenting pace and crunch continuing throughout, while the latter’s choppy groove and melding of machine-gun drumming and bolting fretwork is some of the finest work they’ve produced in years. And while tracks like Lying In State and Fatal Illusion don’t push the envelope from anything they’ve previously done, it all certainly feels a lot more vital than they have done in a number of years, especially coupled with its razor-sharp production.

In fact, the only real fault composition-wise is Dave Mustaine’s vocal contributions. There’s never been a point where his gruff snarls could be considered vocally fantastic, but now he’s essentially a full-blown caricature of himself, now sounding somewhere between a heavy, heavy smoker and a man trying to wrench out his own larynx. It all makes for some really uncomfortable moments, especially on the mid-tempo Poisonous Shadows, whose six minutes seem to plod along in the album’s only real hint of lethargy. It’s also in the album’s lyrical content where the vocals don’t really do the overall body of work justice. There’s a heavy focus on themes of government dissonance and, as Mustaine so eloquently puts it, “crazy science stuff”, and it’s hardly the most ideal subject matter to be tackled by such a shoddy vocal. It means that, while the likes of the title track and The Emperor should come across as rallying, anti-authority stormers, they end up sounding more like geriatric rantings over riffs.

It should also be noted that, while Dystopia is without a doubt Megadeth’s finest output in years, it occasionally feels like it rehashes itself, and especially at eleven fairly lengthy tracks, it drags. It also becomes fairly lost within the rest of Megadeth’s back catalogue, in that it becomes simply another solid album, never matching up to some of their earlier classics. But the fact that this is a band fifteen albums in and are managing to turn their fortunes round for the better is an achievement by anyone’s standards, and Dystopia dispels any worries of Megadeth becoming has-beens. It’s not perfect – far from it – but it’s solid enough, and at this point in their long career, that’ll do.

For fans of: Lamb Of God, Annihilator, Anthrax
Words by Luke Nuttall

‘Dystopia’ by Megadeth is out now on Universal.