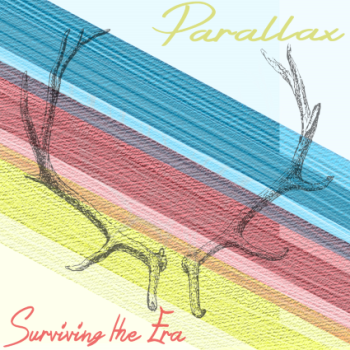 Surviving The Era clearly play by the adage of ‘less is more’. When it feels as though everyone has to have bigger bells and whistles than everyone else to stand out, there’s a lot to be said for the little guy who just ploughs on and does his own thing. In terms of exposure, this Sacramento quintet may be some of the littlest guys around, but as sophomore EP Parallax shows, they’ve got all the tools to make a big noise when they want.

Rather than the Periphery-style tech-metal their moniker could easily see them confused for, Surviving The Era draw much more heavily from the golden age of pop-punk and alt-rock in the mid-2000s. They don’t exactly stand out given the number of acts who were (and in some cases, still are) in that scene, but the strength of the material speaks for itself. Fantastically catchy hooks abound with the likes of Queen Of The Sea beefing up the guitars and stripping back some of the genre’s more saccharine tendencies for some real force. It’s a sound anchored in the emo / post-hardcore territory occupied by acts like Anberlin, with surging instrumentation and smatterings of screams for a bit more edge and power.

‘Power’ really is the operative word, as Parallax‘s five tracks never let up in terms of passion or emotiveness. City Church manages to combine summery vibes, riffs directly lifted from mid-2000s emo and Ryan Sollom’s earnest vocal work in an almost seamless fashion, and Here In The Dark carries a weight and dexterity that benefits its towering guitar line spectacularly. Even the slightly slapdash nature of closer Maps at least displays the same keen ear for melody as its stronger counterparts.

The potential is on show throughout, and it comes in spades. Despite the familiarity and a couple of unrefined moments, Surviving The Era have produced some great examples of no-frills rock, sharp and full enough to prevent it from becoming stale. There’s still a long way to go before they reach the level of the acts they emulate, but Parallax suggests that the journey will be worth it in the end.

For fans of: Anberlin, Yellowcard, The Juliana Theory
Words by Luke Nuttall

‘Parallax’ by Surviving The Era is released on 18th June.