Skip to content
The Soundboard’s Biggest Disappointments Of 2017
Features

The Soundboard’s Biggest Disappointments Of 2017

Up next in our recap of 2017, we discuss some of what this year had to offer that fell drastically below expectations, be that not living up to the hype, […]

Up next in our recap of 2017, we discuss some of what this year had to offer that fell drastically below expectations, be that not living up to the hype, ending up as exasperatingly underwhelming listens, or – in one particularly major case – being pretty downright disgraceful. 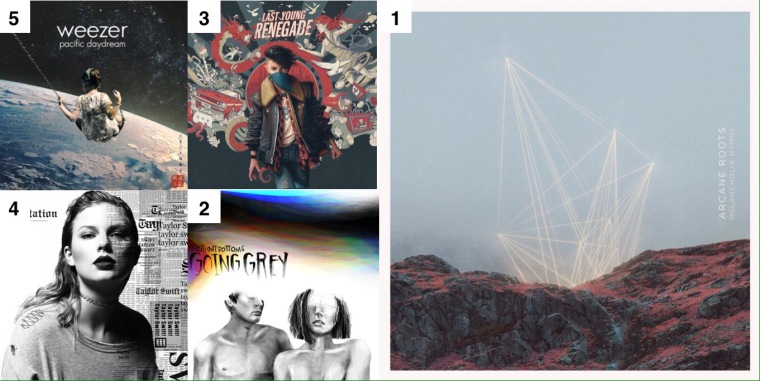 5. Weezer – Pacific Daydream
In theory, this could really have been left off this list – after all, with the wild shifts in quality that Weezer have undergone scattered throughout their career, is anything really that disappointing? Nevertheless, after the spectacular return to form of last year’s The White Album, Pacific Daydream saw an updated pop framework toss aside anything quintessentially Weezer, leaving a cold husk that might’ve had a few good moments, but ultimately couldn’t have been more of a missed opportunity if it tried.

4. Taylor Swift – reputation
1989 proved that Taylor Swift could stick the landing when it came to moving to straight-up pop, so how did she choose to follow that up? With an airless, drab effort at edge in which catty, generalised jabs rubbed shoulders with attempts at dismissing an obvious love for the drama that surrounds her, leading to one spectacularly mismanaged clash. Compared to how vibrant and supple that last album could be, throwing all of that away for a needlessly dour, trap-infused hitlist with no real end goal to speak of wasn’t a good move at all.

3. All Time Low – Last Young Renegade
For as much as Future Hearts was the successful pivot to a poppier sound that Dirty Work struggled to muster, Last Young Renegade is All Time Low – and most likely new label Fueled By Ramen – taking that idea and running way too far with it. Dry, monochromatic synthpop is the dominant force here, even though “force” would suggest there’s some kind of weight or punch there at all, and with some of the most nondescript lyrics and melodies they’ve ever written, their goal for a dramatic, widescreen pop album couldn’t feel less realised.

2. The Front Bottoms – Going Grey
Fueled By Ramen strike again, this time by taking one of the wittiest, earthiest and crucially enjoyable indie-punk bands around, chucking in a load of excessive effects to muscle the majority of that grit away, and leave a painfully underwhelming and stagnant shadow of a band in its place. Make no mistake, there’s still personality here thanks to Brian Sella’s writing which thankfully isn’t subject to the same unnecessary truncation, but the amount of meddling really does end up crippling this album. Fueled By Ramen already have one Twenty One Pilots; why force another one?

1. Arcane Roots – Melancholia Hymns
Of all the albums on this list, this is easily the best, mostly because it doesn’t feel like a band forcing a sound that isn’t there or playing to desperately noticeable half-measures. But considering what Arcane Roots did with a slight move towards alt-rock on their fantastic Heaven & Earth EP, turning away from that for gentle, elegant post-rock feels like a counterintuitive move. Even with the acclaim this album has received, it still feels like the potential of a band that had so much repurposed in a way that fails to flatter them, and even more so that any other album on this list, that’s a genuine shame.

5. Canadian Softball – Awkward & Depressed
YouTube comedian Jarrod Alonge’s step into making music was a genius move, with his multi-genre anthology parody album Beating A Dead Horse and follow-up Friendville, focusing on his fictional pop punk cliché Sunrise Skater Kids, were total wins both in terms of comedy and great songs. But this year’s Awkward & Depressed, an album from emo parody Canadian Softball, falls short of the bar set by Alonge’s prior career. Your Validation, the album’s single does a good job of exploiting genre tropes, but unlike pop punk, you can only push emo so far. If you’re going to venture into Alonge’s work, maybe give this album a miss.

4. Katy Perry – Witness
Yes, the singles were bad, and no, expectations for this album in general weren’t high. But in the past, there’s always been something of a sparkle somewhere on a Katy Perry album, something completely lacking on Witness. This album takes a cold, almost robotic approach to a pop rebrand, jumping on trends left, right and centre and stripping us of the sugary, tongue-in-cheek radio hits that usually get stuck in our heads. Bon Appetit and Swish Swish are truly cringeworthy, and nothing here that isn’t forced down your throat via radio plays is all that memorable. Certainly the biggest misstep of Perry’s career so far.

3. Miley Cyrus – Younger Now
Say what you want about the Miley Cyrus of three years ago, but Bangerz, the album that went hand-in-hand with her twerking days, did have some great songs, and a genuinely interesting pop identity. This year’s follow-up Younger Now undoes that completely. Gorgeous first single Malibu made it obvious a change was imminent, and while the album does a great job of showcasing Cyrus’ stunning voice, it shows only the tiniest hints of her sparkling personality. These songs just feel far too safe, the result of someone caving in to widespread pressure to rebrand, and following the in-your-face, controversial Bangerz album cycle, everything about Younger Now is just soggy in comparison.

2. All Time Low – Last Young Renegade
2015’s Future Hearts proves that All Time Low could still write a pop punk banger or ten, so this year’s follow-up Last Young Renegade was without a doubt one of the biggest disappointments of the year. It felt like the expected move for All Time Low was to move into pop, and it was not done well at all. Dirty Laundry may have been a grower, but it was nothing compared to their earlier material. Even the title track, which was supposed to be a continuation of their original sound, is anaemic and definitely not up to the standard we all know they’re capable of.

1. Sexual assault allegations
The sheer number of musicians who’ve had to address allegations of sexual misconduct this year has easily been the most disappointing thing in music this year. Hearing stories of how band members have taken advantage of fans, underage or not, has tainted their music, and the music industry in general, for so many. The behaviour of fanbases in certain cases regarding not hearing victims out, and in some cases sending abuse online, has also been deplorable. We all need to do better in 2018, whether you’re a music industry official or a fan, and try our absolute hardest to stamp out such behaviour in the future.