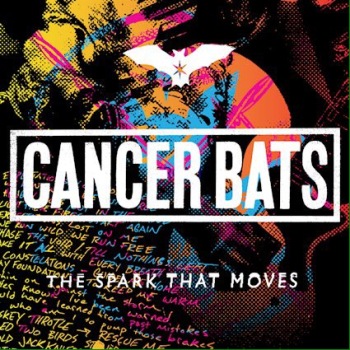 As one of the few unanimously adored bands in punk and hardcore, the pressure has been taken off of Cancer Bats somewhat. After all, for a band who frequently masquerade as a Black Sabbath cover band, theirs isn’t the most cut-and-dry path through the industry, and even though 2015’s Searching For Zero being their first truly divisive release, it hasn’t exactly put a dampener on a band still considered one of the most vital and exciting in modern music. And it’s made clear now that the last few years of relative silence have been leading up to something significant, namely the release of The Spark That Moves, put out as both a surprise release, and independently on the band’s own label.

And even from the very first listen, it becomes abundantly clear that this is exactly the sort of thing that any Cancer Bats fan wants – for those left a bit cold by Searching For Zero, this takes the guttural sludge of that album and pairs it with their typically ravenous hardcore for a far more instantaneous listen; for those who’ve been more than happy with everything the Canadians have released thus far, here’s more of that, and just as good as it’s ever been. The Spark That Moves is about as straightforward and quintessentially Cancer Bats as it comes, but is that an issue?

Evidently not, considering that this album retains all the chaos and surging momentum that Cancer Bats have made their calling card, but maybe even a bit fresher than usual. Some of that inevitably comes from Propagandhi’s JP Peters behind the production desk, who amplifies the searing technicality of a track like Bed Of Nails, but there’s also the prominence of the mix’s low end that lends some killer weight and groove to Headwound and Heads Will Roll. This feels like Cancer Bats distilled down to their most potent essence; it’s not some sprawling, multi-part opus or highfalutin vanity project that most surprise albums seem to be, but that’s because it doesn’t need to be that. It’s the plug-in-and-play whirlwind of Cancer Bats at their best, and here that very rarely dips.

It also helps that Cancer Bats have become so adept channeling a loose, sun-scorched delivery that only makes the already-enormous character of Liam Cormier even more so. His unrefined screams have always had so much personality, especially for slipping into a huge gang chorus and feeling so inconspicuous in doing so, but tracks like Space And Time and Rattlesnake occupy a sleazy southern rock mode not unlike Every Time I Die. Of course, the comparison isn’t unwelcome, particularly in the slab-dragging grooves of Can’t Sleep and Winterpeg that power towards the end of the album while remaining as melodically fertile as possible.

Really though, it’s just nice to have a new Cancer Bats album at all. Even six albums in, they’re as hungry and vicious as they were on their first, and even if some of that has been repurposed since, what we get on The Spark That Moves now feels like the definitive version of Cancer Bats. They’ve worked out the ideal ratios of frantic hardcore, fist-pumping punk and bellydragging southern rock, and putting them all together makes a typically brilliant experience from a band who already have plenty of those to their name. It’s honestly hard to think what more anyone could want from this.

For fans of: Every Time I Die, Alexisonfire, The Bronx
Words by Luke Nuttall

‘The Spark That Moves’ by Cancer Bats is out now on Bat Skull Records.