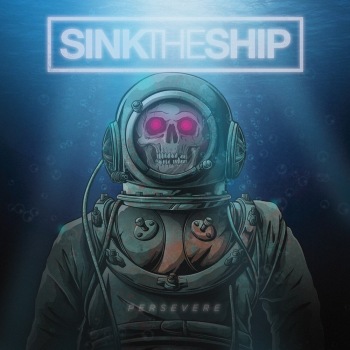 Remember when Chunk! No, Captain Chunk! first came out and were seen as a laughing stock, and then all of a sudden everyone loved them? That’s a solid analogy for easycore as a genre, and while A Day To Remember have taken their pioneering binary of pop-punk and metalcore and smoothened it out to something wonderful, most others haven’t nearly been so effective. It’s quite baffling why the response to easycore has become so much kinder then, especially with how little change or evolution it’s undergone, and especially with the lack of progression seen in so many of its bands.

And as is to be expected, there’s a band like Sink The Ship chomping at the bit to take as much advantage of this as they can. And really, that’s probably the only way for an album like Persevere to get noticed nowadays, as this is the sort of dated-as-hell crash of genres that describing as a fusion would be far too charitable towards. Even by the admittedly narrow standards of easycore today, this doesn’t even stand up then; it’s closer to 2006-era A Day To Remember that 2018 doesn’t support nor want.

And that all starts with the incredibly limited range of what’s actually on offer here, and even though easycore doesn’t pride itself on being a versatile genre, Persevere falls at the wayside even by those standards. Tracks like Everything and Strike First which lean heavier on the metalcore elements are definitely stronger, and the fact that both the guttural screams and sweeter cleans both come from Colton Ulery is impressive enough, but apply this to thirteen tracks, barely any of which deviate from such a cut-and-dry formula, it becomes utterly exhausting to get through. Even that’s without getting into how little each individual part stands out from its source material, both in terms of sound and lyrical content that stays very close to themes of positive exertion that don’t have enough mileage to take up an entire album. In the end, tracks like Domestic Dispute and Put Up Or Shut Up end up chasing their own tails, trying to hit a suitable endpoint but becoming lost in the shuffle as far as everything is concerned.

That’s ultimately where Sink The Ship fall the hardest here; there’s clearly ambition to be some huge, powerful force, but with every single note of this album being wrung out of any juice years ago. There’s bound to be some people this appeals to who won’t care about how derivative and dated this is, but that doesn’t stop it from being either of those things. It’s just another infinitesimally drop in the ocean of pop-punk and metalcore that already has trouble in getting its best material noticed, and chances are that Sink The Ship will most likely just find themselves, well, sunk.

For fans of: For The Win, Chunk! No, Captain Chunk!, Abandoned By Bears
Words by Luke Nuttall

‘Persevere’ by Sink The Ship is out now on Sharptone Records.