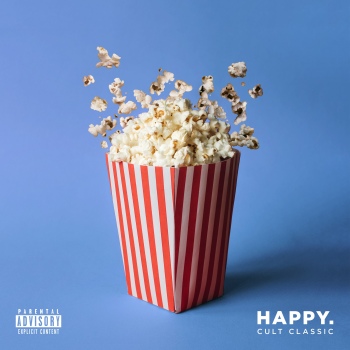 For as many accusations of blatant nostalgic pandering leveled at so many bands, it’s fair to say that, within pop-punk, it actually has some legitimate mileage; the more a band sounds like they belong on the soundtrack to American Pie, the more likely they are to resonate with an audience that was actively around at the time. That definitely seems to be the direction that South Carolina’s Happy. are taking, not only having Cartel’s Will Pugh producing this debut full-length, but tapping so deeply into a well of fizzing slacker-pop-punk that, if this was a recently-unearthed gem from the early 2000s, it wouldn’t be all that surprising at all.

Whether that all translates well into the context of 2018 is another matter entirely though, and while for the most part Cult Classic does enough to make the transition intact, it’s hard to avoid a sense of over-familiarity that isn’t doing Happy. any favours. As a body of work, it feels so deeply ingrained in that high school mindset that comparisons to so many that have come before them is inevitable. It almost feels against the point to criticise Winona Ryder for its use of manic pixie dream girl stereotypes or the loser in a band on Drowners (even if the former’s assertions that they don’t really exist in the modern world feels like a timely update), but you can practically see the framework being built around them, and it’s one that’s been seen many times before. At least that’s somewhat broken with the likes of Fishtank, where the narrator is in an abusive relationship but can’t see it from inside, or the tender Wonder, but above all, Happy. aren’t exactly casting their net out wide enough to reach a truly fulfilling end point, and given that Tate Logan isn’t the most expressive vocalist at the best of times (probably at its worst case on With A Y), it can be a bit too distant, to put it mildly.

Conversely though, it’s in the instrumentation where Cult Classic unequivocally shines the brightest, with the sort of deep rumble and crackling weight that hasn’t been seen in a pop-punk album in some time. The scratchy intro of How To Lose A Girl In 1:45 might serve as a solid prelude to this, but it’s realised to its fullest with the grunge-tinged snarl of Don’t Overdose And Drive and the openly rougher guitar work of Where The Wild Things Were. There’s a particular sourness in the production too, keeping everything feeling low-slung and loose in a way that really benefits it, especially when taking into account Tate’s vocal style which, thankfully, doesn’t become as irritating as it really could. Even if it’s not an album for hooks that go out of their way to pop like with so many other, Cult Classic ultimately feels stronger for a general sense of roughness and ruggedness that so many in their vein avoid.

And if they could just hone the songwriting a bit more, Happy. could be well on their way to doing something great with what they’ve got here; they’re probably a bit too understated for huge mainstream warmth, but there’ll be a sizable following for this sort of thing, guaranteed. As of now though, this is good but lacks that spark of real standout originality that could make it great, almost as if they’re simply testing the waters to see what goes down well. Still, there’s plenty of faith that they’ll have that sorted for their next release, and regardless of the mark this one makes, that’s ultimately going to be better.

‘Cult Classic’ by Happy. is released on 7th September on Rude Records.