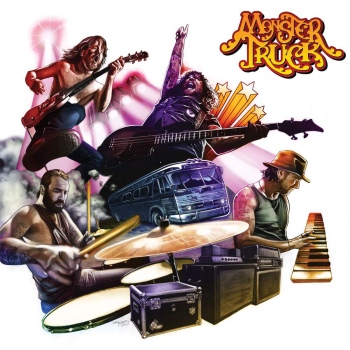 With a title like True Rockers and a cover that looks like Guitar Hero concept art, it’s not hard to deduce where Monster Truck fall on the rock spectrum. But even though they’ve been forging forward with their classic rock revivalism for a while now, like so many others, they’ve seriously struggled to gain more traction beyond those who can’t bear to see the genre update and evolve. And that’s not a good look for any band in terms of their staying power; without a certain pliability to their sound, the chances of being able to last in the long term drastically falls. They’ve managed to do well so far, but when a genre that’s become so quickly oversaturated as this, stability is anything but guaranteed.

And going off what True Rockers actually has to offer, if there’s going to be one band set on the chopping block sooner rather than later, it’s going to be Monster Truck. This is the sort of unashamedly narrow-focused throwback with the sole aim of appealing to those with equally limited tastes, and while there’s no doubt it’ll do that, those limitations make it such a tediously long-winded slog. And there’s a certain comic irony about the fact that this all surrounds Monster Truck’s notions of “saving rock ‘n’ roll”, while simultaneously being the sort of band that’s holding the genre back from progressing to any great degree. Just think about it – in the last five years, how many bands like this have actually accelerated the conversation of rock’s legitimacy by any amount? The likes of the title track and Being Cool Is Over might want to extol the notion that rock’s not dead, and it’s a valiant cause, but not only does the text barely go beyond that sentiment in its most basic terms, but there’s not one moment that feels even remotely contemporary, and thus those who Monster Truck are ultimately trying to convince are subjected to trite hard rock wheel-spinning that’s in no way, shape or form indicative of how exciting rock can actually be (to say nothing of the implied elitism of this being what “true” rock music sounds like). In other words, Monster Truck seem to be suffering from the most malignant case of Greta Van Fleet Syndrome since the genuine article, a band who’s only contribution to the conversation is recycling what’s present in their old record collections and hoping it’ll do something for them.

And just like Greta Van Fleet, Monster Truck clearly have no qualms with not even attempting to push their sound, and sit stagnant in the furrow that they and so many of their derivative peers have been repeatedly ploughing for years. To give them their dues, there are solid moments like the bluesy swagger from the harmonica on Devil Don’t Care and the more spacious radio-rock of Young City Hearts, but True Rockers for the most part feels so pedestrian and formulaic, pairing with its content for an album which seems to genuinely have no clue that yes, you can in fact do more than the bare minimum. Thus, it’s really all the same stuff you should be used to with these sorts of bands – beige, nondescript riffs mingle with basic basslines and drum patterns with the occasional solo for that customary glimpse of flair, while keyboards that are far too high in the mix wheeze out at random intervals that are nigh on impossible to look past like on Denim Danger. Then there’s vocalist Jon Harvey, and while he’s fairly convincing as a whiskey-fuelled longhair riding the highway to hell, the muffled vocal production and the fact that he seriously struggles to enunciate leads to tracks like Thundertruck being borderline incomprehensible at times. For a band with as much push behind them as there currently is, there are some shockingly sloppy moments on here, even beyond what can only be assumed to be a more lo-fi recording style for “authenticity”.

In reality though, Monster Truck are not an authentic band. This is as much of a plastic facade as the pop and mainstream music they’re rallying against, only those acts will actually have the courtesy to admit it. Rather, True Rockers feels like the product of a midlife crisis, where a bunch of jaded, middle-aged men come together to make a career out of reliving their rockstar fantasies, all while completely disregarding the fact that the world has moved on, and no one really wants them here. And fair play to Monster Truck for making a living from doing what they love, but when it’s this blinkered to literally anything and everything going on around it, that needs to be called out and criticised. Really, all these true rockers are doing is starting to sink.

For fans of: AC/DC, The Temperance Movement, Inglorious
Words by Luke Nuttall

‘True Rockers’ by Monster Truck is out now on Mascot Label Group.