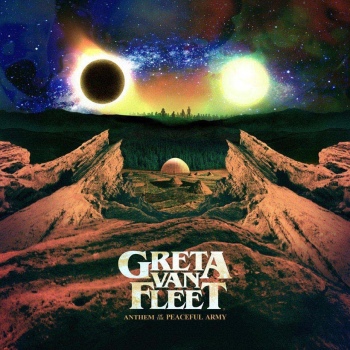 It’s no wonder that Greta Van Fleet are rapidly becoming enormous over in America; their government’s already sending them back decades so why not have music that follows suit? From the perspective of someone from the rest of the world though, the cocktail of emotions upon witnessing this band’s rise is a potent one indeed – part confusion that what is essentially a Led Zeppelin tribute band (even though they insist that Led Zeppelin aren’t an influence on them, which is a blatant lie) is becoming a significant force; part despair at how this is becoming the face of modern rock, and proceeding to stoke the fires of the “rock is dead” crowd by giving them a legitimate reason to think that aping the past is the only way to get ahead. And it’s not like Greta Van Fleet are beyond redemption – for what they are, Highway Tune and Safari Song are both above-average blues-rock tracks – but the fact they’re being pushed with such fervour really goes to show how playing directly to what an audience wants is a way to move forward.

It makes all the hype surrounding Anthem Of The Peaceful Army feel more than a bit undeserved, especially when the tracks that Greta Van Fleet have chosen to preview it with have defaulted to typically hefty and turgid doses of Led Zeppelin worship that don’t even pretend to care that there’s no original personality or flair to be found. That might as well be the tagline for this entire album, as Greta Van Fleet’s unashamed plagiarism materialises as little more than a handful of masturbation materials for the cool kids born in the wrong generation and those who refuse to believe that music released past the ‘80s at the very latest is even worth a passing glance.

And on paper, it’s not necessarily a bad thing for a band to tailor their appeal to a certain audience, but when it reaches a point where it becomes such a brazen ripoff as it is here, it’s hard to see where any enjoyment can be found. It’s not like this is a talentless band either; on the most basic, completely objective level, Josh Kiszka is good at these oversized, powerful shrieks, as is his brother Jake at dishing out a few solid grooves in his strutting, blues-rock riffs. The problem is that the similarities are so stark, there’s no reason you’d listen to this over Led Zeppelin, particularly when Greta Van Fleet are doing it simply to a much worse degree; even the folk influences have been shamelessly stolen for You’re The One and The New Day, just downscaled and greatly simplified of Celtic style to keep them as radio-friendly as possible.

And that’s perhaps endemic of the main issue with Greta Van Fleet, being that, no matter how much they resort to stealing their every idea, they’re just totally unable to make any of it interesting. Where Led Zeppelin succeeded by ensuring that every element of their sound was distinct with its own intricacies, for Greta Van Fleet, that pretty much stops at the Plant and Page imitations at the front. Elsewhere, this album is built on such rudimentary bass and drum patterns that nothing even slightly interesting comes from them, particularly when any solos or great displays of guitar pyrotechnics are much rarer than you’d imagine. It really does pump the brakes on this album really moving anywhere, and when plodding bores like Watching Over and Brave New World constitute a good chunk of the tracklist, it leaves Anthem Of The Peaceful Army feeling so much more bloated than it should, and that’s not even mentioning how flat and slappy the drum production actually is on a track like When The Curtain Falls. There’s clearly been enough of a budget put to this album – otherwise the vocals and guitars wouldn’t sound as sharp and clean as they do – but when so much of it has evidently been doled out to what a casual listener would immediately gravitate towards, the lack of balance, both in sound and ethos, feels galling.

That really puts paid to any suggestion that Greta Van Fleet are different from any other radio-rock band, because they’re really not. They hinge on derivative, overused sounds just like everyone else – though without question even more so – and any semblance of artistic flourishing feels all the more stymied when their frontman and guitarist are the only members given any chance to shine. If anything though, Anthem Of The Peaceful Army is more proof than ever that a band like Greta Van Fleet is just not needed; we’ve already got Led Zeppelin to cover those bases, but even for a mainstream-ready act shaped by classic rock, there are so many other bands doing this with more flavor, energy and imagination. Greta Van Fleet by comparison are a low-rate cover band at best, with undeserved hype that’s only taking column inches away from rock bands who could actually move the conversation forward, instead of leaving it to wallow in the past that’ll only do it more harm than good.

For fans of: Led Zeppelin, The Black Crowes, Wolfmother
Words by Luke Nuttall

‘Anthem Of The Peaceful Army’ by Greta Van Fleet is out now on Republic Records.