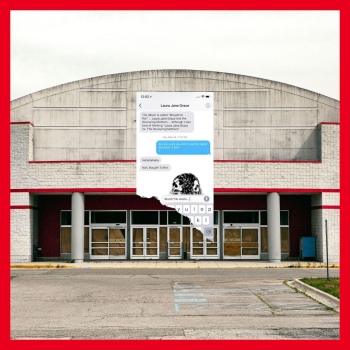 In a way, it feels quite strange that Laura Jane Grace has started a side-project. It’s usually the go-to option when an artist wants to show a deeper, more personal side of themselves that their main band typically doesn’t allow, but given how emotionally rigorous and to-the-bone the last couple of Against Me! albums have been in their content, it can be a bit difficult to see what Bought To Rot can offer, at least while remaining compelling. Sure, Grace has frequently proven herself to be capable of some of the wittiest, most layered and just plain best songwriting around, but that doesn’t automatically wash away any reservations, particularly when an album like this has the freedom to possibly go anywhere.

However, it makes a lot more sense when it’s revealed that the primary inspiration behind Bought To Rot was Tom Petty’s debut solo album Full Moon Fever, an album that continued to show undertones of Petty’s hard-line political stance, but was characterised much more by bigger emotions. It’s something that feels reflected a lot here, as the acidity synonymous with Grace’s writing remains, but is tempered with personal observations directed at both herself and the world around her. It also makes the intentions of this album having more in common with a mixtape making a lot more sense to, in its bringing together of scattered sounds and themes in an almost stream-of-consciousness fashion at times. Thus, Bought To Rot find itself comprised of numerous short thoughts, darting across different mindsets without little consistency or form, but with adroitness that Grace has made commonplace at this point.

Even then, that inconsistency feels more like a feature than a flaw. These are ragged, unfiltered sentiments designed as a necessary emotional release, and in that regard, they can’t really be faulted too much, especially when Grace is digging as deeply into herself as she is here. Amsterdam Hotel Room sees her confront her own anxiety and anti-social tendencies through gritted teeth, while The Friendship Song and Manic Depression elaborate further on how said anxiety pushes her away from others, and how grateful she is for those who understand and stick around regardless. Conversely, The Airplane Song and Apocalypse Now (& Later) detail relationships in free-fall or standing proud even at the end of the world respectively, and I Hate Chicago offers the most concise instance of tongue-in-cheek humour, where Grace lists everything she’s come to hate about her adoptive hometown, before coming to the realisation that it might just be because her ex-wife is there. It’s a loss less conceptual that a lot of Grace’s work wit Against Me!, but without skimping on the reflexiveness and detail of the poetry (the lack of which causes the lullaby Screamy Dreamy to fall short), there’s the usual richness associated with her work that’s incredibly well-earned.

It’s a similar case with the instrumentation as well; the punk core remains stable, but it’s pared back a fair bit to allow more folk or classic rock influences to shine. It definitely helps with the fact that The Devouring Mothers have previous chemistry to let this work as well as it does – drummer Atom Willard is also currently behind the kit in Against Me!, and bassist Marc Jacob Hudson is their sound engineer – and thus the greater exploration of sounds feels more natural, rather than a pick-‘n’-mix approach that tends to lead to wild inconsistencies. It’s not as if that isn’t the case here either, but again, it feels like the point; opener China Beach feels like a riff on The Clash’s London Calling with its sharp, steady guitar lead and feels completely different to the likes of the Strokes-esque inde-rock Of Reality Bites or the mellowed, ‘90s-to-a-fault alt-rock of The Acid Test Song, but as part of a larger tapestry, they all fit. It’s a very metropolitan sound overall, nabbing bits and pieces from notable US scenes and their forerunners, and while not exactly presenting each with much transformative flair, as part of a larger – albeit looser – narrative of the swilling thoughts of a traveling musician, it’s all realised in a way to make this a fuller, more satisfying listen on the whole.

And that’s ultimately a more important end result than it may seem, particularly for an album like this. Grace has already been established as great musician, but Bought To Rot is perhaps the most definitive proof to date of her versatility, both in instrumentation and songwriting. It’s true that it’s not quite up to the level of Against Me!’s best (though given they have more than one modern punk classic under their belt, that’s nothing to be disheartened about), but when your side-project is better than so many other musicians’ main bands, there’s something special there. How far this project will go, on the other hand, remains to be seen, but Bought To Rot is the first piece of evidence that it could be something wonderful.

For fans of: The Clash, Rocket From The Crypt, Frank Turner
Words by Luke Nuttall

‘Bought To Rot’ by Laura Jane Grace & The Devouring Mothers is released on 9th November on Bloodshot Records.