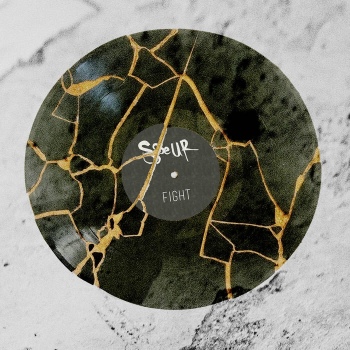 Sœur are a perfect example of the leaps and bounds that Britrock has taken over the past few years. What was previously the catch-all term for hook-driven, unthreatening alt-rock has metamorphosed into something a lot more exciting, encapsulating the bands who march to their own beat with no regard for fashion or popularity. And while Sœur are by no means leading their charge, they almost perfectly typify the rawness that can emerge when a band does go off the beaten path, with a brand of grunge that’s been crossbred with acts like PJ Harvey and Bikini Kill for something defiantly their own, especially in the modern scene.

It certainly make Fight an interesting listen, albeit one that’s not quite as brusque and forceful as its title may suggest. This is very much a slow-burner of an EP, putting Sœur‘s command of restraint and billowing tension at the fore ahead of any traditionally big hooks or instantaneous alt-rock hits. In fact, it’s only the title track that tries something similar to that, and when it’s largely presented as a final exhaling buildup with little satisfying payoff, it says a lot about Sœur’s route for success.

And really, when they embrace such a natural niche they’ve carved for themselves, Fight can really hit some great moments of quality. The flicking, minimalist basslines that drive Quiet It and Out Again have the sort of weaving, hazy strut that’s reminiscent of Garbage in a really great way, and the level of tautness that’s conveyed to highlight the struggle and stress in the lyrics is something to be commended, especially when Sœur can tap into that effectiveness so well. It helps that both Tina and Anya are as strong of a vocal unit as they are, both with piercing, easily distinguishable tones that contribute to a brittleness that keeps enough edges exposed. As much as the artwork is inspired by the Japanese art form kintsugi – namely reassembling shattered objects with gold glue – the same could easily be said about the sound itself, piecing together sharp shards of noise to an extent where the cracks are still visible, but the final product is elevated so much higher than the sum of its parts.

That’s why Sœur – and really, this whole current wave of Britrock as a whole – remain such a promising prospect, with music that’s not afraid to leave its imperfections in but can still hit decently hard with some interesting, catchy moments. At the minute, Fight definitely feels like more of a truncated version of what they’re capable of, but it’s already doing some great things in its own right, most likely only getting better as time goes on. Perhaps that won’t amount to huge mainstream success, but in the underground, there could be some serious waves made in the near future.

‘Fight’ by Sœur is released on 17th November.