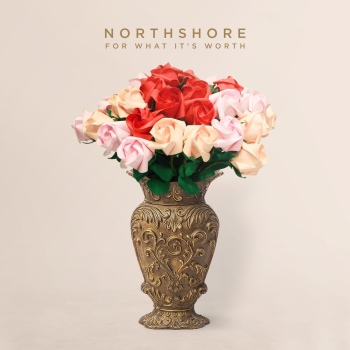 There tends to be a bad feeling when bands like Northshore come around nowadays, and not because first impressions are all that negative. Granted, the title track of this EP didn’t make the greatest start, but any apprehension typically surrounds the types of Britrock and pop-rock this band are looking to make their name with, and how viable that can actually be. It only takes one look at the rapid decline of bands like Mallory Knox or how Deaf Havana have shifted to far more modern, trendier sounds to highlight these issues, and when that’s exactly the opening move that Northshore are making, it feels like they’re deliberately setting themselves to start on a weaker foot. Of course, the proof is in the pudding, but it’s not like For What It’s Worth is looking to set the world alight, even on the rather scant evidence they’ve displayed up to now.

And lo and behold, For What It’s Worth ends up almost exactly how these types of releases usually do – it’s not all that objectionable and Northshore can pretty regularly prove that they’ve got a good ear for a pop-rock hook, but that can’t outweigh a blandness that comes from such a lack of distinctive features, and a toothlessness that all too easily slips into forgettability. At least the signs were telegraphed right from the start, but that still doesn’t mitigate a profound lack of ambition that For What It’s Worth displays, and leaves it falling into Britrock fodder territory rather than anything capable of discernible impact.

It’s not as if there’s nothing to like, either; there’s a lovely smoothness and clarity to Dan Shepherd’s vocals, and when combined with the more fine-tuned pop-rock of a track like Dependence or the wistful richness of Summer, there’s a bit more pep that definitely leaves an impression, even more than a lot of other Britrock. The overall sound hits nicely for what it wants to achieve to, latching on to distinctly melodic progressions and a pervasive sense of light that makes pop-rock in this vein pop that crucial bit more. That all sounds like some fairly positive appraisal, and at the end of the day, it is; Northshore aren’t a bad band by any means, and though it wouldn’t hurt to fire up some more ideas, when working with what they’ve got, the results are certainly pleasant enough.

But that lack of ideas proves to be their damning flaw, and for every solid hook or melody that Northshore dish out, there’s plenty more that could’ve been imported directly from the early 2010s, such is the lack of real mileage a sound like this has. It’s rather fitting that DAY’s Christina Rotondo provides guest vocals on Shedding Skin, as it only highlights the main issue that both bands have – for as soundly as they can execute their work, there’s no inspiration that goes past mainstream rock in 2015 at the absolute latest, and For What It’s Worth does begin to feel more and more dated with every listen. Sure, there’s some more polish and sharpness in the production that’s a bit more contemporary (perhaps a bit too much but it’s easy enough to let slide), but the mid-paced, unwaveringly equable alt-rock formula is one that can get extremely stale without anything substantial to augment it, and a slightly poppier clearly isn’t enough to have a considerable effect. Coupled with lyrics that deal with a very easygoing, radio-friendly take on topics like mental health and ending relationships, it’s hard to glean all that much flavour from what Northshore are offering here.

It’s definitely not irredeemable, and a command of melody that’s as decent as it is prevents this EP from being an outright failure, but when this brand of Britrock is already on life support as it is, it would feel disingenuous to pretend that Northshore are really bringing enough to stand out. At least there’s confidence that could potentially serve them well in the future, but it’ll take a major overhaul to see any significant results; right now, this is all rather inoffensive and disappears from memory as soon as it’s over, and even in the short term, that’s going to leave For What It’s Worth lost in the shuffle.

‘For What It’s Worth’ by Northshore is released on 15th February.