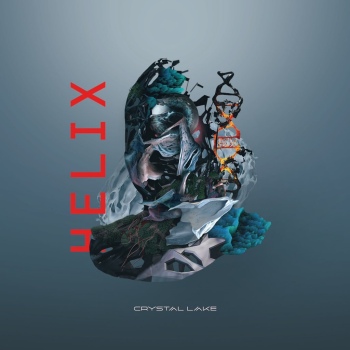 While nowhere near as bad as it used to be, metalcore still has a problem with oversaturation. Though not at the level it once was any band with a single that could poke its head above water was touted as the future of the genre, it’s still at a point where the hype is rarely met, and trying again and again to foster some sort of good will around what will inevitably become also-rans in record time is just beginning to feel a bit obvious. And for the uninitiated, the same could be presumed about Crystal Lake; the boon of the Japanese rock and metal scene has given them that initial elevation, but with four albums already under their belt, it highlights how rote and formulaic the process of giving these ‘new’ bands such a brief spotlight can be. However, from what they’ve offered so far from Helix – namely razor-tight metalcore with a keen focus on aggression and bringing their sound to its heaviest zenith – there’s definitely more hope here than there has been in the past, and if the whole album can land as soundly on its feet, there could actually be some truth behind this band revitalising the genre in a major way.

But there’s always the argument that, if Crystal Lake were capable of doing that, they’d be a much bigger property than they currently are, and that’s a notion ultimately reflected by how Helix turns out as a whole. More than anything, this comes across like the band isolating their best features for their highlight reel upon coming to prominence, throwing ideas all over the place with little worry about cohesion or what really sticks. And while such a perceived lack of focus could easily be to their detriment, Helix pulls through as a particularly strong metalcore album, seldom producing anything mindblowing, but consistently demonstrating an approach to metalcore that hints at a band with much more to offer in the future.

And with that, it’s worth noting where about Crystal Lake fall on the metalcore spectrum, because yes, they do share a lot of similarities with fellow countrymen Crossfaith. The electronic element is vastly turned down here (and when it is used more prominently, it’s prone to becoming misguided and jerky like on Just Confusing), but as far as razor-sharp execution and production that emphasises heaviness when needed, Helix taps into that same vein of influence with results that frequently hit a high watermark. Aeon is the most immediate example with its surging guitars and machine-gun drumming as the perfect backdrop for Ryo Kinoshita’s formidable screams, but there’s an excellent command of Bury Tomorrow-esque scope on Agony and Lost In Forever, and even hints of nu-metal bounce on +81 and the Disturbed-style vocalisations of Hail To The Fire. As far as pulling from the metal landscape goes, Crystal Lake have their fingers in many different pies, and while that can make for an album that’s overall bitty and not entirely congruent, they produce enough individual thrills for that to be easy enough to look past.

The writing takes a similar path as well, though perhaps with even less connective tissue. That would be fine for the most part – metalcore has never been a genre that’s placed too much importance on the writing – but when Crystal Lake display some legitimately interesting ideas and bigger, more explorative themes, it’s a shame that they don’t really coalesce into more. The juxtaposition between religion and technology on Aeon or a deeper dive into philosophy on Outgrow have a lot of untapped mileage on this album, but what they bring feels unfortunately cut short as Crystal Lake simply move on to something else that typically falls below that standard. The vapid party-metal of +81 or the aptly-titled Just Confusing are the main culprits, and while there’s nothing wrong with a sweeping metalcore ballad on Lost In Forever (particularly when it’s delivered with the gusto and emotional brute force that it is), it can feel a bit too safe for a band clearly verse in far more dynamic, diverse topics. It’s where the fragmentation is at its most counterproductive, stymying deeper creativity for individual moments that, while still good, would succeed on a far greater level with more cogent exploration.

But even so, Helix really is a strong album from a band that have the potential to gain huge prominence within metalcore. It’s definitely not the scene shake-up that it was anticipated to be, but with the size, power and potential for far greater depth and nuance that Crystal Lake display here, the possibility for them to go much further isn’t off the table just yet. Of course, work still needs to be done to make that possibility a reality, but compared to vast swathes of metalcore chancers expecting to hit the big time and flaming out before they’ve even had the opportunity to do anything, Crystal Lake seem as though they could have real staying power going forward. Don’t forget the name; with a bit of time, you could be hearing it a lot more.

For fans of: Crossfaith, Bury Tomorrow, Miss May I
Words by Luke Nuttall

‘Helix’ by Crystal Lake is out now on Sharptone Records.