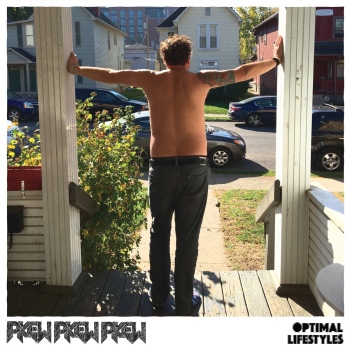 It could’ve been easy to write off Pkew Pkew Pkew on first impressions alone. Not only could the unwieldy moniker be a pretty considerable turn-off right away, but for the last couple of years when punks have primarily been looking inside themselves for their reflective soul-poetry, a twenty-minute album hitting the vast majority of ‘90s pop-punk beats and trying to muscle into the same scene could easily have been seen as almost deal-breakingly basic. And yet, that’s what ultimately proved to be Pkew Pkew Pkew’s appeal, and while bands like The Menzingers would end up as the bigger names within that scene, stripping away some of the layers for snappy punk exuberance proved to be a good alternative. But that sort of thing tends to struggle to last in the long term, and it’s best that Pkew Pkew Pkew are among the first to realise that, and thus, Optimal Lifestyles arrives as almost a behind-the-scenes of its predecessor, digging deeper into Pkew Pkew Pkew as people for a potentially longer-lasting and more resonant listen.

And even right off the bat, it’s easy to see how the two can almost be companion pieces, or at the very least part of an interconnected progression exploring ageing and growing up disgracefully. As opening tracks go, Still Hanging Out After All These Years is probably the most apt conduit between the two releases as just another rollicking bro-punk song about reconnecting with old friends and drinking way too much, but the layers are quick to fall away to alter the portrait this band have previously painted of themselves. The alcohol-fuelled buzz is evidently still there, but the passage of time has left it feeling even more futile, set to the backdrop of gentrified tourist attractions on The Polynesian or the too-tame banality of the titular Adult Party. Reminiscence goes a way to salving the wound on Drinking Days and Mt. Alb, but Pkew Pkew Pkew’s efforts reach a refreshing level of equable maturity upon the realisation that growing up is inevitable, and while it’s not what they want (and the lost concept of freedom and an inhibition-free lifestyle is something they continue to crave on I Wanna See A Wolf), it’s better than being the embarrassing friend still living in the past on Skate 2, or the ones who go to debauched clubs even when they’re old enough to know better on The Pit. It’s a surprisingly dynamic take on a theme that usually boils down to the simple process of pining for the good old days, and even if the jumbled sequencing takes away some of the greater punch, it’s the framing of embracing such changes through consistently high-octane punk that keeps Optimal Lifestyles hitting with every fresh detail and vignette added.

It’s an execution that’s not exactly new either, but the reputation that this sort of bounding, boozy alt-punk has built up as the style of choice for the genre’s young-at-heart immediately gives Pkew Pkew Pkew a head start. Apart from the well-timed slow-burn of Not Getting Through To You, Optimal Lifestyles makes the most of its ragged, deliberately imperfect punk through an abundance of crunch and sneer, with Mike Warne as the semi-jaded, all-sardonic mouthpiece that’s frequently a great fit. Most importantly though, melody takes pride of place here, and whether that’s pulling from the deliberate simplicity of power-pop on 65 Nickels and The Polynesian, gritty, layered alt-rock on Drinking Days and Passed Out or unfettered pop-punk exuberance on I Wanna See A Wolf, the energy and snappiness is nigh-on impossible to avoid getting consistently sucked into. Coupled with a DIY production style that keeps all the signature warmth that this sound has become so known for, Pkew Pkew Pkew might slot into their scene almost too perfectly, but when the results stand out as much as they do here, it’s incredibly hard to criticise.

And even then, it’s not like Pkew Pkew Pkew would want to change too much. They’ve already made serious waves by keeping to these very sounds, and what is clearly a deeper, more evolved standpoint for this band to take is enough of a progression to keep this album as fresh and entertaining as possible. And make no mistake, Optimal Lifestyles is certainly fresh and entertaining, taking such a reliable theme and throwing such a clear sense of positivity and light its way to really bolster the energy and life that’s so prevalent here in a brilliant way. Sure, punk of this stripe is definitely familiar at this point, but bands like Pkew Pkew Pkew are a testament to why it’s still worth keeping an eye on and loving; when there are albums like this doing the rounds, it would be foolish not to.

For fans of: The Menzingers, PUP, Spanish Love Songs
Words by Luke Nuttall