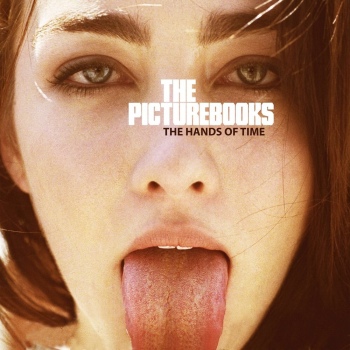 Look, there’s every reason to go into an album like this expecting absolutely nothing. The Picturebooks are a two-piece that have been regularly grouped into the blues-rock and garage-rock camps, a fact that can applied to swathes of other bands that, in the past, have proven to be not worth caring about in the slightest. The one bit of solace is that they’ve actually got a bit more experience, having been around since 2009 rather appearing out of nowhere one day, but even so, the most played-out musical formula of the last few years really doesn’t sound appealing anymore regardless of who’s playing it. But apparently The Hands Of Time has accumulated some level of buzz around it, and while expectations aren’t exactly skyrocketing after that knowledge, it’s interesting regardless to see whether The Picturebooks have actually done anything here to warrant that attention.

And in all fairness, there’s at least a bit more here overall. For one, the garage-rock ties seem to be a bit of a misclassification, as the primary throughlines on The Hands Of Time can be much easily traced through southern and country-rock in what gives this duo the most incremental edge ahead of the competition by virtue of being slightly different. On its own merits though, this is generally fine but really can suffer when it’s as one-paced and heavy-handed as a lot of it can be, and on the whole, what could’ve been an inoffensive yet perfectly listenable album is turned into more of a chore to get through than it rightfully should be.

What’s even more disappointing is that this more or less feels like the duo’s realised intention instead of a vision going mismanaged beyond their control. The aim was clearly for a rugged, roaring country-rock stomper embedded in dusty, gritty Americana, and while The Picturebooks do hit that mark to an extent (the soulful yet deeply burdened a capella of opener Horse Of Fire is probably the strongest example), there’s definitely more than could’ve been done to at least close the lines and make it seem less haphazard. The main problem is the almost incessant desire to plod by with barely any life or vibrancy, and while that presumably conscious decision could’ve been to foster the swampy, downtempo growl that’s often an easy sell in southern rock, the lumbering chain rattles that provide production on tracks like Like My World Explodes and Tell Me Lies simply feel too loud and overweight to make enough of an impact, regardless of actually quite good harmonica melody on the former. It’s not something that The Picturebooks ever really rectify either; a track like Electric Nights might pick up more of a rollick, but the drums are so heavy-handed that they effectively dull any sort of groove the guitar is trying to forge. It’s hardly something that can be ignored either, when it slices the pacing of the whole album to ribbons and only really achieves the desired effect on The Day The Thunder Arrives when paired more tense pianos and darker rumbles of bass.

The magnitude of this immense weight is truly felt when looking at what else The Picturebooks offer here, which, in all honesty, isn’t that bad. Fynn Grabke’s coarse howl probably stands out the most with its thick, full-throated sneer, and paired with the dense desert air that’s pretty much imbued within every note of this album, it makes for a really strong fit, particularly on a track like Lizard that nabs bits and pieces from ZZ Top-esque boogie-rock for some great propulsion. Sure, the writing might be trying to wedge itself a bit too hard into that same scenario in grizzled tales of hard livin’ and sizzling wilderness imagery (let’s not forget this band is from Germany), but it’s an easy enough sell for a vocalist of this style, and even does some decent work for Chrissie Hynde of The Pretenders with some decent interplay on You Can’t Let Go. And yet, the argument can be made that all of that belongs to a much better album than this, as with every clattering drumline that becomes more and more wearisome, the good will going to The Picturebooks for trying something like this just continues to evaporate. It might seem unfair to dock that much from a band for what essentially boils down to one fault, but when it’s as integral to the overall album as this, and when it detracts so heavily from what otherwise could’ve been at least decent, it needs to be pointed out.

That’s why it’s largely easy to feel sorry for The Picturebooks here. They’ve come into The Hands Of Time with good intentions and a decent crop of ideas that mostly pan out, but they’ve fallen at the final hurdle in truly spectacular fashion. It ultimately makes this a far weaker album than it potentially could’ve been, lumbering lazily through its eleven tracks instead of fully utilising the tar-thick swampiness that’s constantly been open to them, and yet has just been sidelined almost completely. That feels like a wasted opportunity, and even if The Picturebooks have hit upon exactly what they wanted with The Hands Of Time, it’s not too difficult to see what they better final product would’ve been.

For fans of: Whiskey Myers, The Graveltones, Blackberry Smoke
Words by Luke Nuttall

‘The Hands Of Time’ by The Picturebooks is released on 8th March on Century Media Records.