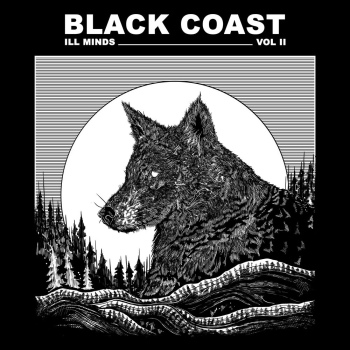 This is possibly the best time that Black Coast could’ve chosen to release their new EP. Ill Minds, Vol. 1 was the sort of undeniably strong work that greased the wheels for an incredibly exciting band to continue moving forward, and unlike full albums that can easily become diluted or cannibalise their own momentum if released too quickly in succession, a follow-up so soon after only builds on what was already established. Thus, Black Coast’s brand of dense yet melodic hardcore can really only benefit from an expansion like this; it’s a greater opportunity for the band to grow and build on their existing sound, as well as keep up a level of momentum that they’ve kept surprisingly high in the interim.

It’s certainly bled through into this follow-up EP, especially when there’s been very little sonic change whatsoever, but Black Coast have such a keen ear for what makes hardcore as visceral and slamming as this work. Thus, Vol. 2 might still have the same overall issues that its predecessor had – namely a tendency to wear its influences (especially a whole load of While She Sleeps) incredibly prominently on its sleeve – but it’s all utilised to such a high degree and with a level of power that it’s hard to complain really at all. As much as consistency doesn’t produce all that much new to say, especially in the wake of such a short turnaround time, it’s admirable to say the least when the band continue to deliver great music.

It’s definitely the sort of hardcore that benefits from that sort of consistency as well, as Black Coast’s vision of a sound tha retains the crushing heaviness of the underground with an unashamedly wider focus is one that’s easy to tune in to. It’s pretty much established right from the off with Act II, as blackened, head-caving guitars lead into enormous melodies not too dissimilar from the aforementioned While She Sleeps, with vocalist Charlie able to hit that perfect balance between sweeping bellows and a sense of dread that’s never lost. Again, it’s not a new dichotomy, but Black Coast do extremely well at working with it, deftly weaving between both ends of the spectrum on Diablo and especially Weird, and keeping the amount of big, brazen melody healthy in streamlined production and a focus on atmosphere on Solace. Tied together with writing that makes fantastic use of that vocal power in its sense of anger, Ill Minds, Vol. 2 is about as solid as follow-ups come, taking everything that made the first great and reiterating it with quality that’s barely moved an inch.

That’s why there’s really not much to say about this one; if you liked Vol. 1, then more of the same that’s just as good is bound to please. That sort of stasis obviously won’t lead to success in the long term, but right now when Black Coast are largely still establishing themselves within the hardcore scene, that’s a sort of consistency that will serve them well. For now, there’s still plenty to like from a band whose ability to excel in their craft is showing no sign of slowing down.

For fans of: While She Sleeps, Beartooth, Arkdown
Words by Luke Nuttall