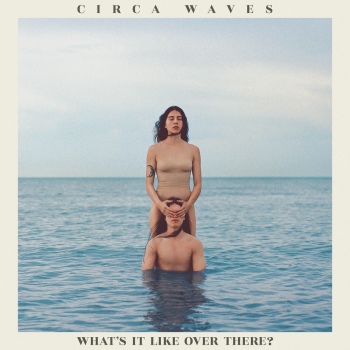 At this point, it wouldn’t be too unfair to suggest that Circa Waves are running on fumes. Theirs is an archetypal example of the indie boom and bust that’s become so predictable with depressing efficiency, with their debut Young Chasers being what took them to the stars for a brief summer, Different Creatures being a decent follow-up that couldn’t compensate for wavering interest, and now What’s It Like Over There? attempting to brush up any broken pieces and assemble something. More than most though, it’s easy to feel sorry for Circa Waves; unlike many of their indie peers in 2015, they never had the pretensions of grandeur that made a band like Catfish And The Bottlemen so unlikable, and a way around a decent indie-pop hook that could get in and out with minimal fuss set them on some stable ground. But times change and evidently that ground is collapsing, and for a band whose stock has been in freefall for basically years at this point, What’s It Like Over There? feels like a last-ditch effort to hold off total implosion for at least a bit longer.

How much longer, though, is a bit of an open question, because even for those who haven’t been keeping up with where Circa Waves have gone, this feels like a pretty slight listen that doesn’t do the band a whole lot of favours. As much as Different Creatures saw them adding some darker shades into what had been an almost perennially sunny package (and did so quite well, to be fair), What’s It Like Over There? as a next step lacks any sort of grace or depth that could come from taking those ideas further again, with the results being just another indie album that doesn’t stick around too long and rarely brings any comprehensive ideas to combat that. It distinctly feels like a band treading water, and in almost every aspect of its existence at that.

The most blatant occurrence of this is in how so little of this album feels like it has any sort of identity. Apart from the sole outlier of Movies whose sunnier skip is probably the only moment reminiscent of the foundations that Circa Waves built their sound on, What’s It Like Over There? is awash with derivative, paint-by-numbers indie tropes that only seem here to get something down on record, not advance any artistic progression. The fact that it’s all such a mess doesn’t help here either, as the band pull from about half-a-dozen recognisable sources when trying to cobble together something distinctive, but it only highlights how little they’re actually doing with them beyond overlaying a fresh vocal take over these incredibly well-established formulae. There are certainly standout moments among these, like the pulsating new wave balladry of The Way We Say Goodbye or the booming riff-rock of Saviour, but those two alone underline how little consistency or synergy with itself this album actually has. That’s obviously an issue, especially when considering there’s no clear indication of the band that Circa Waves want to be at any point, but for the most part, it’s just not that well executed. This used to be a band defined by a sense of tightness and spry energy, so to see tracks like Sorry I’m Yours and Me, Myself And Hollywood lumber by under fat slabs or percussion, or the clanging looseness of Times Won’t Change Me jingle by with inert pianos feels incredibly disappointing. Alongside production that’s about as colourless and unremarkable as you’d expect from modern indie in this stripe, Circa Waves attempt at reinventing themselves here feels like a wildly misguided failure.

And it’s not worth focusing in on the writing to take any of the heat off, because that’s clearly not going to happen. Circa Waves have never been all that profound as lyricists (part of the reason why they can feel so faceless among other indie bands afflicted by the same issue), but What’s It Like Over There? reeks of the same low bar as the rest of the album, rarely venturing beyond a safe coterie of themes that connect well enough, but feel so drained of vigour and flavour, pretty much like the band themselves. Sure, it’s hard to begrudge an album like keeping its benchmark at nostalgic former love, and in that regard, tracks like Movies and Passport do a good enough job, but it’s hardly enough to keep this album afloat, especially when you’d be hard-pressed to find an interesting lyrical twist or motif that really does anything of increased value.

Put every factor together, and What’s It Like Over There? is the unequivocal dying breath of a band that could’ve offered a lot more. There’s no faith gone into this album, at least compared to previous efforts; it’s not interesting to listen to or dissect, and at only ten tracks (one of which is the instrumental intro), Circa Waves haven’t even given it the space to be. That’s probably the most disappointing thing here, that Circa Waves have barely even attempted to make this a decent album rather than a body of work that can keep the wheels chugging for just a bit longer, something that speaks much more negatively of the revolving door system of the indie hype machine than the band themselves. That’s not to say they’re totally absolved from blame though, because they’re certainly capable of more than this.

For fans of: Sundara Karma, Blossoms, The Hunna
Words by Luke Nuttall

‘What’s It Like Over There?’ by Circa Waves is out now on PIAS.