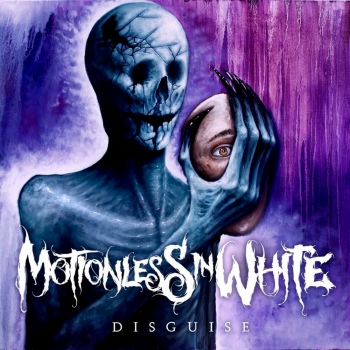 Given their track record, it’d be tempting to call Motionless In White a singles band, but even that isn’t strictly correct. They’ve never really had consistency in anything, even for a metalcore band, to the point where it’s effectively a fool’s errand to predict what they’re going to deliver at any given time, with the only certainty being they’ll stick to an overwrought, schlocky blend of metalcore with industrial and gothic elements that they’ve been resting on for years. And really, for a band who’ve released four albums up to this point without finding a solid means of progressing, it’s a bad sign that only implies that Motionless In White really don’t know what the best course of action for them to take is; even their last album Graveyard Shift, despite being the most consistently entertaining release to date, exhibited some glaring flaws that most bands would’ve typically had ironed out by album two at best. It makes it seem as though Motionless In White are just putting stuff out there at this point and clinging onto the hope that something sticks, and given that nothing in the run-up to their fifth album Disguise has suggested anything different, this looks to be the sort of stock, standard Motionless In White release for which the majority of preconceptions will undoubtedly come to fruition.

And with all that in mind, Disguise sure is a Motionless In White album. In fact, it might be the most indicative example of what a Motionless In White album is yet, as the band have barely budged an inch in terms of their approaches and how to divide each one between their skills, and continue to offer a concise, straightforward showcase of what their strengths and weaknesses are. If that sounds remarkably dull and formulaic, it’s because it is, though if that sounds strange with this band in particular, clearly you’ve not been paying attention over the last decade. This is effectively Motionless In White’s fifth go-around with the exact same skills and prime materials, and so it should come as no surprise that Disguise doesn’t feel any different whatsoever, be that sonically or in terms of quality. The only distinctive attribute that this one bears is that it seems to take itself a bit more seriously than some of its predecessors, but that just leads to an album that feels even more faceless and uninspired than it already does.

What makes that even more baffling is that there’s a lot that Motionless In White can do with their sound that they still appear strangely reticent to properly try out. They’ve still got a bad habit of flooding their mixes to the point where there’s no room for anything to breathe or grow beyond boundaries that feel unnecessarily regimented, but always, Disguise feels as though it’s pulling from the right sources in a way that could be arranged into something workable. The low-slung nu-metal guitar tone has always been among the strongest strings in this band’s bow, especially when meshed with fragments of whirring, industrial electronics that make tracks like Headache and </c0de> feel so formidable, as well as Chris Motionless’ more fluid vocals that can morph into a Manson-esque rasp like on Brand New Numb. It’s all stuff that’s been in Motionless In White’s wheelhouse for years now, but they do it all well, once again reaching a peak when they notch up the pomp and theatricality with the strings and Tim Burton twinkles on Undead Ahead 2: The Tale Of The Midnight Ride and bring everything together for a massive slobberknocker chorus.

But again, that’s all to be expected; replace the song titles and that could be a fitting description on any Motionless In White album. And that’s why Disguise hits the stumbling block it’s unable recover from, in that there’s nothing here that even suggests that this band are moving forward, or even attempting to solve any of the issues that have dogged their releases essentially from the beginning. For starters, there’s still no consistency to any of this, with the sequencing being slapped together with no real forethought, and that can be especially damaging here in an album that’s looking to parade its bigger, more universal themes above anything else. That in itself is a rather slippery slope for a metalcore band to embark on, especially given how badly ideas of positivity and introspection have been butchered by weightless self-esteem anthems, and on the title track and the thumping, Skillet-aping radio-rock of Legacy, Motionless In White stagger into almost every pitfall as their peers before them. To be fair, they can at least show some more capability when putting their own spin on this sort of thing like with </c0de> and Broadcasting From Beyond The Grave: Death Inc., but they still hit those lows that blur into the usual, mushy insufferability. But when that remains the album’s primary focus, having Undead Ahead 2: The Tale Of The Midnight Ride right in the middle of the tracklist seems like a decision that really doesn’t make sense, digging a wedge into the central theme for a track that’s definitely better, but pushes the camp, horror-tinged stylings to the fore in a way that really doesn’t gel. It only highlights just how little Motionless In White are doing to combat their own weaknesses; they’ve done this sort of thing before and it didn’t work, so why trying again with nothing changed will yield a different result is a total mystery.

But at the end of the day, Motionless In White have gotten this far off this exact formula already, and clearly their game plan is to cater for existing fans who really won’t be too bothered about how these shortcomings will play out. But by doing that, they’re leaving an openly flawed prospect out in the wild with no protection going forward, and given that this is the fifth time they’ve done just that, they’re not going to change. Especially this time given everything that’s come before, it makes Disguise feel like a rushed job, in which the band can’t even be bothered to push themselves beyond the boundaries they determined for themselves about ten years ago by even the slightest amount. It simply makes the music feel less worthwhile than it should, and when Motionless In White have substantially more in their locker than so many other early-2010s metalcore bands, that’s openly wasting potential at a rate that’s not sustainable going forward. At this rate, Motionless In White will only continue to go around their loop of self-perpetuating mediocrity, something that’s only going to do more harm over time than good.

‘Disguise’ by Motionless In White is out now on Roadrunner Records.