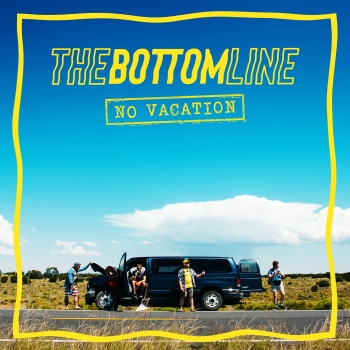 It doesn’t seem like that long ago when being a pop-punk band was virtually a guaranteed fast-track to some form of success, especially in the UK. What started out as a scene on its deathbed in desperate need of revitalisation ended up glutted with clones, to the point where the whole genre falling deeply out of fashion more recently felt like the most beneficial thing that could’ve happened. It’s also been advantageous for new bands making their first proper steps now as well, outlining the overdone templates to largely avoid to have a better chance at actually achieving their desired success. With The Bottom Line, then, they’ve been around for a few years now, but have always welcomed comparisons to bands like New Found Glory over the UK wave, and even if it’s not quite paid off for them just yet, the fact that they’re actually releasing a full-length album is a testament to a longevity that plenty before and since just haven’t been lucky enough to achieve.

However, turning to No Vacation for any explanation for that yields little more than The Bottom Line being a good band to have around in the pop-punk drought, if only because they embody pretty much everything the genre has based itself on to the letter, and can pull it off to a decent enough standard. Admittedly, it’s not much, but The Bottom Line aren’t a band that given much more away, and for the world-beating intentions that they evidently have, more will undoubtedly need to be done to get there. Right now, No Vacation operates as a totally serviceable gauntlet of hooks that any pop-punk album worth its salt can achieve, but it’s not like the boat is being pushed out by any meaningful distance, if at all.

That in itself isn’t necessarily a problem, but when The Bottom Line’s reference points are laid out so plainly, a lack of innovation can become indicative of how little they really have of their own. The clearest case is made on Doomed with its acoustic guitar line coming across almost like a carbon copy of All Time Low’s Bail Me Out, but in truth, No Vacation is positively coated in the DNA of genre stalwarts at almost every turn. The New Found Glory worship extends past the melodies of Over And Over and Like The Movies and into the nasal affectations in Callum Amies’ vocals that are more than a bit reminiscent of Jordan Pundik, while the general production style has all the chunkiness yet lithe bounce of late-‘90s / early-‘00s blink-182, and the writing handily comes across like a grab-bag of themes fixated on by both of those bands, among many others. It’s all certainly preferable to the over-sanitised, wishy-washy production of modern pop-punk, and there’s no denying that The Bottom Line deliver it with suitable gusto, but it’s also difficult to look past the pieced-together nature of it all that’s preventing the band from really shining with their own thing.

On the other hand though, judging No Vacation on quality of performance alone – a concession that’s often been the trump card of numerous pop-punk bands who otherwise would not have found success – makes for a rather enjoyable listen overall. The band clearly have hooks for days, delivered with tons of youthful energy and sparkle for a good amount of likability. Particularly on tracks like Over And Over and Everyday which throw their mid-paced, bouncing melodies forward at terminal velocity, The Bottom Line play up a sense of fun that, coming after so much of pop-punk’s self-serious wave, makes a pivot towards fun that’s fantastically refreshing. Just in general, No Vacation satisfies any pop-punk sugar cravings with ease, keeping to consistent quality and working as a lightweight, pretension-free summer album that, when ignoring its derivations, can offer a solid amount to enjoy. It’s not life-changing, but The Bottom Line are doubling down on what they’re best at and succeeding.

For now, that’s a perfectly fine way of operating as well. There’s no doubt that No Vacation will make people sit up and take notice, and considering the dearth of UK pop-punk recently that’s done much of anything whatsoever, this is definitely worthwhile to have around. But this is a springboard and very little else, and if The Bottom Line want to make that bigger leap, they’re going to have to start taking more chances and develop something that they can call their own. A relatively early stage like this means its easier to get away with such blatant hero worship, and while striving for something original in pop-punk is an uphill battle against a near-vertical incline, at the end of the day, it has to be done. Right now though, The Bottom Line are steadily chugging along with decent material that’ll probably suffice for them, and given how long they’ve stuck it out to reach this point, it’d be unfair to take it away from them.

‘No Vacation’ by The Bottom Line is released on 21st June on Marshall Records.