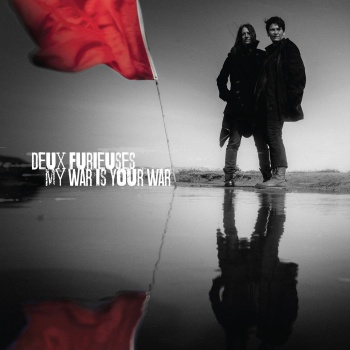 It’s been a longstanding notion that times of great social and political hardship birth music that feels so much more necessary as a presence to cut through the noise, and with the amount of great punk, hardcore and metal that’s sought to address the imbalances over the last few years, that can certainly seem true. But given that it doesn’t seem to be stopping any time soon, there’s always room for more to make themselves known, which is why the increased profile around Deux Furieuses now feels so pertinent. Their debut Tracks Of Wire made quite a bit of noise in the underground with its scathing, no-nonsense post-punk, and with their current home on Xtra Mile (the leading purveyors of UK punk and just general, all-round excellence), the release of My War Is Your War couldn’t feel more critical.

And it’s worth acknowledging that, alongside that, this isn’t the sort of rousing, populist fare that a lot of top-rising conscious punk has been lately. Deux Furieuses instead choose to favour much bleaker, barer tones, to the point where it couldn’t be easier to see where the comparisons to acts like Savages and PJ Harvey have been made in just how ruthless this duo is at capturing the oppressive weight of the world they’re coming into. It’s certainly an acquired taste, and one that’s sometimes a barrier that My War Is Your War is unable to scale, but it’s also arguably what makes this album stand out so much. The darkness within it feels a lot more tangible, and paired with an almost skeletal setup and a greatly enclosed presentation, the impact My War Is Your War leaves can’t be denied.

That being said, it’s easy to see how this album can be seen to falter from a constructional standpoint, and even though a lot of that feels tied down to both Deux Furieuses’ vision and the genre they find themselves in, the general lack of groove or progressions that feel deliberately stilted or jerky on the likes of the title track and Words Of Warning don’t really culminate with the same visceral force. This isn’t a fast-paced listen by any means, but there’s a noticeable difference between a track employing tension and grinding attrition to its advantage, and one that simply seems to plod along without doing much along the way. It almost feels like an accidental slip-up on the duo’s part, especially when the gap between the two outcomes is so narrow, and it’s to their immense credit that they’re able to make it work as regularly and successfully as they do. The rumbling low-end guitar and rattling percussion on Thorns and Let Them Burn has force but also a creep and slow burn that’s so enveloping, while Ros Cairney’s rawer vocal style brings to mind the likes of the late Dolores O’Riordan in keeping the balance between a necessary amount of delicacy and melodiousness, and the seething anger beneath the surface that only adds to the wider tension. Altogether, it’s the sort of brash, disarmingly simple sound that’s able to pack a lot into such a relatively narrow margin, and even if Deux Furieuses’ efforts don’t always land, the force is typically there to keep the fire within stoked.

Said fire comes in the form of the broadsides the duo launch across the album, with the shots being broad and wide-ranging but having a good amount of velocity with which they hit their targets. It’s the same technique that’s prevailed for plenty of punk bands recently, and Deux Furieuses find a similar amount of success with it, though their greater sense of targeting does give them something of a leg up. There’s a natural weight to tracks like Civilians about the innocents caught up in military interventions overseas, and Cruel Winter surrounding the uncaring attitude that so many have towards the homeless, but the personal stakes on Song For Kat about a friend’s suicide has much deeper resonance overall, as does the knowledge that, eventually, good with prevail overall on the closer Are We Mental. There’s definitely a set pool of themes being dipped into here that have been cycled through a good number of times recently, but it’s still refreshing to see Deux Furieuses put their own spin on things to re-establish their own unique persona.

That’s rather important too, because even if they can occasionally stumble on My War Is Your War, it’s still worth noting that there’s not really another band in the modern punk landscape occupying the same space as Deux Furieuses. Cross into post-punk and that might be different, but there’s definitely a niche being carved a bit deeper with this album, and that’s impressive to see. As well as the more considered take on composition and writing that’s been taken, it’s the sort of thing that’s going to see Deux Furieuses go a lot further, where they can maybe lift themselves out of the underground and take on the wider realms of some of their contemporaries. There’s a way to go before that yet, but the seeds have been planted with this album, and that’s a good start.

For fans of: The Cranberries, PJ Harvey, Brutus
Words by Luke Nuttall

‘My War Is Your War’ by Deux Furieuses is released on 18th October on Xtra Mile Recordings.