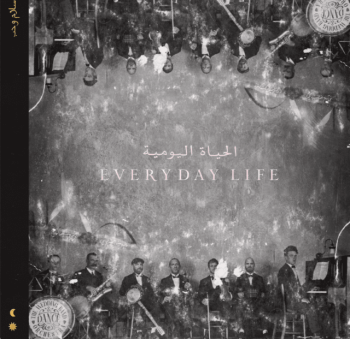 Here’s a question – in an objective sense, how would one describe Coldplay’s music? It’s a hard one to answer, mostly because the first terms that come to mind for many when discussing Coldplay would be ‘boring’ or ‘middle-of-the-road’, and while neither of those are all that wrong, especially with regards to their recent efforts, it doesn’t really help forward the conversation in terms of where the band are actually heading. But then again, is it worth forwarding that conversation? It’s not like Coldplay themselves want to do it too much nowadays, having fully outgrown their humble indie-rock roots to fully assimilate with the stadium-pop magnates of the world, to the point where resting on their laurels has been something they’ve not exactly been averse to in recent years. But that then circles back to the original question and where Everyday Life factors in, because if there’s one release of the most modern incarnation of Coldplay’s that – on its face, at least – could come across as ambitious, this does look to fit the bill. Not only is it a double album (for all intents and purposes), but it sees the band bringing in a myriad of global influences and sounds in a way that could be interesting if utilised correctly.

That ‘if’ comes flanked by tremendous, throbbing asterisks though, as audiences to the current middle-brow paddock that Coldplay have settled themselves in tend to spaff themselves silly over any such incorporation, regardless of how it turns out (just look at the last Vampire Weekend album), and for a band like Coldplay for whom no idea is currently above their station, that can put them in some dicey territory in the balance between what they themselves expect to achieve, and what actually comes from it. And look, it’s not like the Bono comparisons that Chris Martin has been saddled with in the past have been unjustified, but on Everyday Life, an album that really accomplishes very little of any magnitude and yet near-constantly seems so pleased with itself, the air of self-satisfaction really seems to have set in, and the results really aren’t that good or indicative of any great shift in the social tectonic plates as it believes it is. Or to put it another way, it says mountains that one of the last major releases before Christmas boils down the majority of its message of change into maudlin, fluffy platitudes about togetherness that’ll get the warm fuzzies going, but leave no lasting impression whatsoever.

As such, it’s easy to attribute a lot of that to some pretty glaring holes in both the text and subtext, neither of which seem to connect with each other, nor do the band display any interest in trying to rectify that. After all, this is their big, new album that needs to be their latest smash hit, so why jeopardise that by adding in greater detail, or thematic layering that could possibly make their intentions work? It’s not like there isn’t potential here either, and the worth can be seen in embracing a sense of worldwide communality through the abundance of choirs, or the incorporation of Middle Eastern vocalisations and poetry on Church and بنی آدم respectively and the monologue from Belgian house artist Stromae against the horns from Femi Kuti and his band on Arabesque. But they’re isolated instances, and pretty rare ones at that, as most of Everyday Life sees Coldplay spending their time trying to highlight the need for change to bring about that togetherness in some of the most boneless ways imaginable. The mawkish bloviating bereft of any songwriting flair on the likes of Daddy and the title track is bad enough, but then there comes a track like Orphans, where Coldplay seem to think it’s a good idea to give jaunty indie-pop twinkles and jubilant child backing vocals to a track about Syrian children being killed in air strikes. That’s where Everyday Life really begins to become unpleasant, as Coldplay place their own desire for populism against real subject matter that ends up feeling like an afterthought, and really cheapens an already threadbare take on this sort of thing. It really sticks in the worst way when they so thinly veil their money-making intentions under a blanket of social commentary as well, as if When I Need A Friend wasn’t explicitly designed to invoke a festive atmosphere given this album’s convenient release date, or Èkó doesn’t feel like it was crafted by committee to be primed to slot into any amount of Comic Relief footage for the foreseeable future. When the commentary itself is so thin and the execution of said commentary has next to no deeper nuance to it, it leaves Everyday Life dripping in such a cynical, self-important air that just doesn’t achieve anything beyond gratification for Coldplay themselves. It’s awfully manipulative, especially for a band who frequently come across as innocuous as Coldplay do, but in a way that just makes it seem all the worse.

And it’s not like the instrumentation redeems them by any sizable amount either, given that it’s the area that Everyday Life has already taken the most flak for with Coldplay going way beyond their boundaries into territory that just doesn’t work for them. And honestly, it’s not that it doesn’t work per se – they’ve done this sort of drivetime-friendly indie plenty of times in the past and it’s usually been fine – but the avenues in which they approach it on this album feel as though they’re riding on the pretentiousness that hasn’t been earned even slightly, and yet they’ve attempted to mould this entire album around. Let’s be as blunt as possible – no one wants to hear sappy acoustic pablum like Daddy or Old Friends coming from Chris Martin of all people, who still has a shockingly limited voice despite the years he’s had to hone his abilities, and when that minimalism breaks down even further with a worthless interlude like WOTW / POTP, it’s genuinely worth wondering if Coldplay know where their strengths lie. Honestly, that’s something worth pondering as well, as there’s really no consistency when it comes to what lands and what doesn’t. Church is a pretty solid return to their more contemporary, poppy sound with its gleaming production and popping beat, something which is revisited with far less success on Cry Cry Cry, and while the choppy acoustic strumming of Guns is by no means great, it at least shows that Coldplay can do a more basic, stripped-back song like this with at least a bit of life to it. But once again, that just highlights the issue that Everyday Life really doesn’t know what it’s doing, as it meanders through a cobbled-together collection of sounds and outside influences before trying to apply some kind of profundity to it all retroactively. It makes an already inconsistent album feel that much more unformed and scattershot, and when the end results aren’t all that impressive to begin with, it’s hard to see what Coldplay really wanted to achieve here.

And at the end of the day, when considering that, it seems fitting that they don’t really achieve anything at all. There’s probably a seed of an idea here, or something that the less adventurous listener will probably see as deep or meaningful, but in the grander scheme of things, Coldplay morphing into U2 in terms of their own ambition and bloat isn’t something that’s really wanted or needed. But they’ve done it anyway, and the results are just as unconvincing as anyone could’ve reasonably predicted, to the point it feels like Coldplay themselves aren’t even sold on what they’re saying, and are just using it as a vehicle to shift more units when that was always guaranteed to happen anyway. Tied together with some questionable framing and an unresponsiveness that rivals everything else in their discography, Everyday Life is a failure by some degree, and of a greater magnitude than merely another boring or inoffensive album can muster. What will come from this remains to be seen, but considering that Coldplay are unlikely to face many of the ramifications of this, there’s a very real chance we could be seeing more myopic, lazy work like this. Fantastic.

‘Everyday Life’ by Coldplay is out now on Parlophone Records.