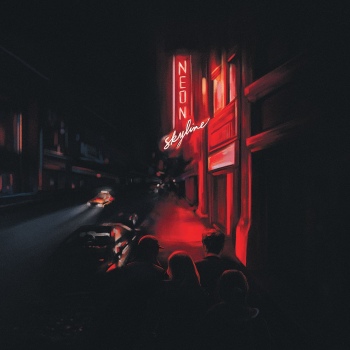 This is the sort of album that’s so easy to dread talking about, as the chances of having absolutely nothing to say are so high. The singer-songwriter genre tends to be split into camps of truly inspired, poignant beauty or dull pablum in which creativity is barely a factor with very little in between, and it’s much easier to fall into the latter camp than the former. Still, at least Andy Shauf has some grounds upon which his hype is built on, with a songwriting style that’s been compared to Randy Newman and Joni Mitchell, and a fair number of radio breakthroughs and award nominations in his native Canada. Granted, the bubble in which Canadian music can often reside in can make those achievements a bit more difficult to swallow, and they’re overall not enough on their own to completely eliminate the skepticism that accompanies The Neon Skyline. Albums this deep in a career have gone awry before, especially in a genre as difficult as this, and any level of pedigree isn’t an immediate prevention strategy for that.

That’s all more than a little relevant to The Neon Skyline, an album that feels as though it’ll appeal to the exact people it’s designed to appeal to and precisely no one else. That might be a rather spurious complaint to make, but a very narrow focus in pretty much every creative realm pins down Shauf as an artist who isn’t that concerned about widespread appeal. Thus, when it comes to examining The Neon Skyline from an outside perspective as a listener who isn’t already in that built-in audience, it’s hard not to be underwhelmed, especially when this kind of indie-folk runs in a fairly recognisable pattern with regards to what hurdles it falls at. That won’t be a problem for anyone who’s already along for the ride and for whom the usual trappings of indie-folk is a selling point rather than a stumbling block, but otherwise, The Neon Skyline is something of a non-presence.

Again, it’s a rather weird complaint to wield against an album as low-key and unassuming by design as this one is, but where the best albums of this stripe have a layering and detail to their delicacy, there’s just not much to go on with The Neon Skyline. Shauf himself is the most immediate presence, but that comes from a Canadian curl in his accent that gives a willowy and rather meek delivery only a little more personality. It’s a bit too hemmed-in to really make an impression at that, and when paired with a similarly bare and soft instrumental canvas, the whole thing is too pillowy and toothless to really connect, and too eased-back in its simplicity to catch the ear all that much. The slight accents of horns are something, especially when it feels as though they build a bit more on a track like Things I Do (which doesn’t amount to anything but the thought is at least nice for a moment), but simple acoustic strums, thicker, reverberating basslines and soft percussion to hold everything together isn’t a setup brimming with depth or intrigue. It’s at least all produced to sound rather nice and have the warmth of the intimate barroom setting that’s clearly trying to be fostered, but that sound is still limited by design, and The Neon Skyline never goes beyond its means to bring more adventurousness to it that would be greatly appreciated.

Granted, an album that stays as deliberately small-scale as that typically requires on its writing to do the heavy lifting, and to be fair, The Neon Skyline isn’t without the charm and moments of sweetness that feels on-brand for an artist like Shauf, framing himself as a rather hapless and lovelorn protagonist going to a bar when he learns that an old flame is back in town and wants to reconnect. It’s the smaller details that form the better moments, like the lovably awkward attempts to strike up some form of chemistry once again on Try Again, or the Proustian reminiscence of better times spurred on by such a small, unassuming stimulus on Clove Cigarette. Here is where Shauf feels his most at home as a writer, capturing these details that have human emotion woven into them, and where they can make a more resonating impact above everything else. It’s just a shame that’s not a more consistent factor, as the narrative of coming to the bar before heading out a regrouping with the ex can feel a bit lumpy in spots, as tracks like Thirteen Hours and Living Room try to bring forth those quainter memories, but don’t feel as though they keep it moving forward to an sizable degree. It’s nice that they’re here to set the scene and flesh out these characters, but that’s about all their good for, and told in Shauf’s free-verse writing style means that there’s very little about them to latch onto.

And at the same time, it’s still very possible to see how some will be endeared by what The Neon Skyline has to offer, and how Shauf presents himself as an artist; going a step further, it’s even possible to see where some of that appeal lies in a very relatable, humble framing. But to say that culminates in much of substance is pushing it, and it leaves The Neon Skyline feeling pretty threadbare as a result. There’s not much of note to find here beyond the odd cute indie-pop turn to bring it a half-step away from being the most unethused indie-folk, and even that isn’t enough to eke out anything all that interesting or enthralling. It’s one of many albums like this that, like with every year, will end up forgotten as quickly as it came, and just like with the majority of them, it’s not hard to see why.

‘The Neon Skyline’ by Andy Shauf is released on 24th January on Anti- Records.