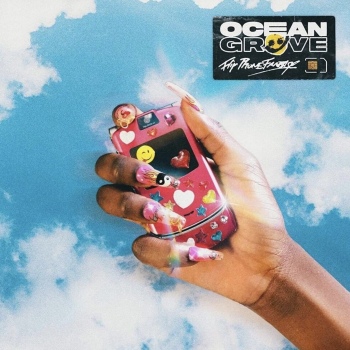 When Ocean Grove released The Rhapsody Tapes in 2017, it left what could’ve been a cratering blow on the face of metalcore at the time. When so few bands felt like they were taking risks or were just following the set rubric to the letter with each subsequent outing, here was a band emerging from the Australian scene that was the epicentre of the mediocrity (or so they say, given that the planet they’re actually from has yet to be discovered) with an unabashedly weird concoction of nu-metal, alt-rock, grunge and all manner of nuggets from every pocket of the ‘90s, buoyed by a woozy uncanniness and sense of humour throughout to fully top it all off. Even today, The Rhapsody Tapes is the sort of dense listen that’s more accurate to call fascinating than outright great, but for a band whose profile had been swelling prior to that album, it was a well-earned boost that has just about kept Ocean Grove running up to this point. And that ‘just about’ is important to where Flip Phone Fantasy arrives, given that inertia from consistency is barely a factor within Ocean Grove’s repertoire, and a fairly lengthy gap between albums can be a difficult wall to get over for a band whose core sound is spread quite thinly already.

And while it would be concerning if another band in the same position would go into said new album with a range of sounds that’s even more diverse and disparate, you can tell that Ocean Grove know they’re capable of landing with at least some degree of stability. The fact they’ve effectively covered their backs already by describing this as more of a mixtape says a lot about the intentions of Flip Phone Fantasy from the start, and in the myriad of sounds thrown against the wall where consistency or flow hasn’t been given even a second thought, it comes across as the sort of project with the intention of flexing its creative muscles placed far ahead of everything else. And because Ocean Grove are as utterly insane as they are, they’re able to pull this off without flying too far off the handle or hitting too many bum notes along the way. Chalk it up to dumb luck or incredible proficiency looking for an outlet, but Flip Phone Fantasy actually does end up sticking the landing in a fashion, despite every indication that it should do anything but.

But then that also raises the question of how to analyse this as a body of work when, in reality, it’s more of a collection of parts fashioned into an almost-whole where the cracks and gaps are plainly still visible. The only real constant is how metalcore has been phased out altogether, giving the band’s nu-metal side a more prominent platform but also filling in sections with increased quantities of grunge, alt-rock and even Britpop and drum ‘n’ bass. It’s certainly a messy album which is unfortunately to its general disadvantage, but at least it can still be pinpointed whenever Ocean Grove hit something close to a stride. Tracks like Superstar and Ask For An Anthem come draped in the colourful, almost cartoonish side of nu-metal with the focus on highly pronounced grooves and hectic percussion (especially in the latter with the jutting blocks of guitar which sound excellent), but that’s the most complete thread that leads back to their debut. If anything though, the fact that Ocean Grove do succeed as often as they do with a canon of sounds as wide as it is is certainly impressive, especially when it feels as though so many of them are new, or at least retooled. The steamrolling alt-rock and crunchy beat of Sunny and the washed-out shoegaze vibes of Shimmer are the perfect fit for Dale Tanner’s elongated drawls that heavily call back to all manner of ‘90s frontmen; conversely, the slamming jungle clatter of Guys From The Gord and deliberately unstable clangs and whistles surrounding the bass groove of Sway are the sort of experiments that might have been stumbled upon by accident and still turn out rather well. More than anything, that completely destroys anything in the way of flow or real charted progression, and when that comes to the pace-killing acoustic number Baby Cobra or the decent-but-less-inspired nu-metal cuts like Junkie$ and Freaks, it really highlights how little the sequencing of this album plays any sort of role. Great moments come from it, but the lack of a direct path or even the possibility to extrapolate those moments does limit them somewhat, and as much as it’s the whole point to have them thrive as individual pieces, the fragmentation being as pronounced as it is can be a bit distracting at times.

The fact is though, that’s presented solely as a feature with the idea that it could possibly be a flaw never entertained. It’s definitely impressive that Ocean Grove have charged into that mindset so brazenly and seemingly with no concern about any issues that could arise, and for as lacking in connective tissue as so much of Flip Phone Fantasy is, it’s kind of impressive at the same time. If genre barriers or even ideological ones are to be broken down, this feels like the way to do it, especially when that’s looking to convey such a wide gamut of emotions and scenarios in its rather brief space without it feeling rushed. That’s definitely an issue, and it manifests most prominently in the perceived anger and cathartic outlet of Neo (an idea which the more chaotic Guys From The Gord makes feel more vital, at that), but in general, Ocean Grove are able to move from one place to the another with relative swiftness and cover that ground effectively. Superstar is the big, swaggering rockstar fantasy, while Ask For The Anthem maligns the lack of depth in modern music; Sunny is the call for positivity and to explore the world, while Shimmer feels more gentle in its self-esteem boosting. It’s an album of contrasting ideas clashing to achieve whatever widespread message can be eked out of it, and it somehow all feels like it’s coming from a valid place despite how disjointed it is. It’s certainly impressive – and again, potentially accidental – and it shows just how far in terms of quality and range Ocean Grove can take their musical collage style, probably further than anyone else who’d try it.

Then again, it’s hard to think of anyone else who would try it, given how this feels like a planets-aligning kind of deal as far as this thing working goes. Then again, Ocean Grove’s hand for the unconventional has seen them do well before and this is no different, now with an even wider selection of tools at their disposal and the know-how to forge a satisfying conclusion from them. That satisfaction isn’t definite or permanent, but it’s there more than it isn’t, and it’s a testament to Ocean Grove’s creativity and acumen that Flip Phone Fantasy can even achieve that. Whether they can keep this sort of thing up for much longer remains to be seen, but as long as this band of weirdos keeps overextending their reach and somehow getting quality from it, there’s still a lot to pay attention to.

‘Flip Phone Fantasy’ by Ocean Grove is released on 13th March on UNFD.