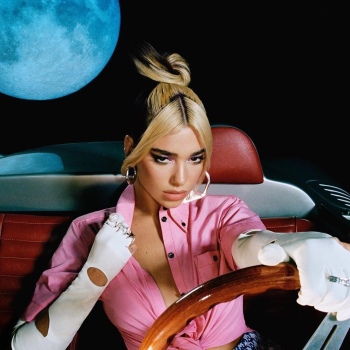 There’s a lot that can be gleaned from an album title like Future Nostalgia. In recent years, pop music hasn’t been shy about openly pulling from its past in order to form some kind of reaction, but that implication from an artist like Dua Lipa doesn’t really fit together too cleanly. Despite being one of the UK’s biggest pop exports in recent memories, that’s come as a result of modernity paired with tight songwriting as opposed to explicitly weaponised nostalgia, existing in a pop ecosystem that’s been forging its own path rather than observing what came before. And yet, between this album’s title and singles like Don’t Start Now and Physical that have taken a number of cues from funk and disco in a way that’s never really factored into Lipa’s work, there’s a rather weighty statement that’s being made here. There’s both an open acknowledgment of how the repurposing of past sounds plays a more significant role than ever before, but also an attitude that comes from implicit proclamations of this being the template from which to pull from in the future. Of course, the confidence of the latter isn’t exactly out of Lipa’s wheelhouse, but even a number of really strong hits that have earned her an invaluable pop foothold doesn’t quite feel conducive with such a sizable leap, especially when the album as an artform has unequivocally been put on the back burner within modern pop.

Then again, if there’s any real litmus test for graduating from pop artist to pop star, it would be to see how an album context fares, and in the case of Future Nostalgia, it’s probably the best pure pop album to come from anyone in the last few years. That might seem like a big claim, but Lipa’s hitmaking nous has never been sharper or more ubiquitous, and when the vast, vast majority of tracks here could be legitimate smashes in their own right, that feels like a major hurdle has been cleared, even if it might not have been hugely noticeable to start with. Regardless though, Future Nostalgia is a leap into the pop stratosphere delivered by an artist who’s fully crossed any of her prebuilt boundaries, and compounded into the sort of universally likable and praiseworthy listen that, really, doesn’t come along all that often.

It’s not hard to see where so much of that glory comes from either, with nary a drab tone being present among wave after wave of disco and funk influences where the presence of bass and perpetual groove are the key elements. Making that known is pushed right to the fore as well, with tracks like Don’t Start Now and Pretty Please effectively having their instrumentals drop out in places to hammer home how tight and propulsive the bass melodies are, and doing so without feeling like jarring shifts. There’s what’s close to an organic flow to this album, not only because that bass tone is so constantly rich within the mix, but also because the eras that Future Nostalgia so heavily draw from has its kinetic energy build in that feels well-suited for a contemporary update that really doesn’t need to do all that much. It’s rare to hear pop songs bolt headfirst into outwardly joyous and vibrant tones like Physical and Hallucinate do, and even when turned down like with the steamy smoulder of Cool or the remarkable poise and elegance of Love Again, the core of strength within these compositions is absolutely unshakable. It’s almost akin to Carly Rae Jepsen’s move to synthpop on E•MO•TION, where everything just has a tightness and robustness to it, and cloaked in retro flair that juggles authenticity with just the right amount of kitschiness to make it work. It’s something that’s handily kept balanced by Lipa’s vocals, with a huskier range and more stoic delivery that stops everything spiralling off into saccharine or cheesy territory. In terms of the composition and structuring, it’s exactly what you’d expect from a huge, mainstream pop album, but when it’s produced to accentuate how fun and colourful it can be to such an enormous degree, it’s so much easier to give Future Nostalgia the leg up in the rankings of modern pop. If it wasn’t for the fizzle out at the very end with Boys Will Be Boys and its plucked strings and children’s choir, this would be a borderline masterful display of pop artistry from front to back.

However, it is necessary to revisit that track in order to zero in on Future Nostalgia’s solitary real flaw, and how it effectively comes from that track unnecessarily weighing the album’s very end down. It’s a fine enough track in isolation, as a reflection on the double standards set by society in how men and women’s behaviours are differently scrutinised, but it’s hard to come up with a reason for why it’s on this album in particular. It’s pertinent, sure, but when almost all of Future Nostalgia is so much lighter and more carefree, it’s an odd thud to close out on and doesn’t feel like a satisfying conclusion at that. The same issues aren’t replicated anywhere else either; the confident flaunting that comprises a lot of this album is rarely ever not enormously charismatic and infectious, be that in the swaggering title track to kick off the album with Lipa basically projecting how awesome she is, the surge of post-breakup vigour on Don’t Start Now, or even the hate-sex on Good In Bed that’s played with real buoyancy. Regardless of how these individual tracks sound, the payoff is the same, not straying too far beyond the relationship format of a lot of pop but bringing in darting energy on Physical and Levitating or seductive smoothness on Love Again that’s all so well-integrated.

It really is great stuff, faltering once at the very end and never anywhere else, as Lipa taps into such a rich vein of pop inspiration that mightn’t be pushing the boat out, but has every single component operating at full capacity. Rarely do pop albums come out feeling this wholly complete and adept at hitting exactly the marks they need to, never mind an album with the legs to leave a serious impact on a mainstream level. But that’s what Future Nostalgia is – it’s a galvanisation of the foundations of modern pop at a time when it’s not really needed but is so appreciated, and to see Dua Lipa doing it better than practically anyone while her star only continues to rise really does hit the spot. This is about as good as pop gets in 2020, and that’s no mean feat whatsoever.

‘Future Nostalgia’ by Dua Lipa is out now on Warner Music.