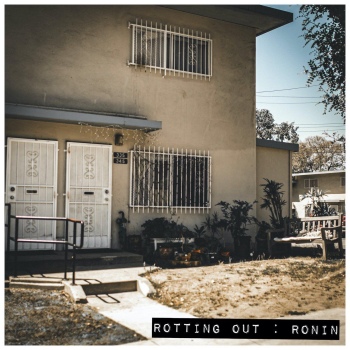 The name Rotting Out has picked up quite a lot of ubiquity within modern hardcore circles, to the extent where, from an outsider’s perspective, it might be slightly bewildering to learn that this is actually their first album in seven years and their first release overall after a three-year hiatus. Indeed, Ronin arrives as a capper to a lot of turbulence within the Rotting Out camp, extending even beyond a band level given that vocalist Walter Delgado was arrested in 2016 for transporting an estimated 700 pounds of marijuana. As such, the rebirth of Rotting Out and the release of Ronin almost feels as though it’s coming from a place of necessity; the tension that’s been accumulated over the last few years now has an outlet to erupt, and for a band like this who spent the best part of the 2010s establishing themselves as one of hardcore’s most vital and exciting properties, it’s hard to chalk up this particular revival to anything other than true, cathartic purpose.

That definitely seems like the case when listening to Ronin, in which Rotting Out’s sheer battering force alone is enough to edge them further beyond other, similar-sounding hardcore bands. On a similar train of thought, they aren’t pushing themselves outside of their own genre – this is still a hardcore album and nails down as many recognisable hallmarks of that as such – but at only twenty-five minutes long in which brutality and bloodletting are the two primary themes that never let up, the impression that Rotting Out are emphatically doubling down on everything this sound can do is an impressive fit. Even if that succinctness is at the mercy of not bringing anything new to the table, Ronin simply feels like a more exhilarating approximation of that hardcore sound.

It’s actually the writing that’s the biggest contributor to this, the area that’s typically easy to gloss over with this brand of heavy hardcore, but the weight of experience in Delgado’s words hits with serious magnitude as he recontextualises his persona of the ronin to a man that’s been cut off, stepped on and beaten down, and is looking to claw his way back onto his feet again. The determination to just reach that next rung up on Last Man Standing morphs into scathing takedowns of those who’ve judged him by his past on Stones, all delivered with incredible conviction, vitality and, on Still Her, even hints of gratitude and love. And yet, those moments of triumph on Ronin are still encroached upon by some very real darkness, like claustrophobia and paranoia from inside prison walls on Reaper, or memories of childhood abuse that re-emerge as guilt on Unforgiven. It all culminates with Boy, in which years of pain and trauma come surging back as Delgado tries to battle his way through them, with the closing note of teeth-gritting tension being one of struggle, but also of perseverance and tenacity to break through and reach the light again.

It’s all powerful stuff that certainly fits with the charge and low-hanging swing of hardcore like this, even if that in itself isn’t particularly unique to Rotting Out. Sonically, Ronin isn’t the most distinct outing in its genre, especially when the double-time barrel of a track like Vessel makes it even more difficult to pin down exactly where Rotting Out’s key personality traits lie, but everything moves at such a brisk pace anyway that it’s hard to be too critical of anything like that. Here, Rotting Out use their limited time well, hitting some faster, more punk-driven strides on Stones and Visceral, or allowing the darkness and oppressiveness of Boy to expand itself with a five-plus-minute runtime that dwarfs any other track on here. That in itself can come close to being an issue when there’s something of a lack of development in so many tracks falling below or just about scratching the two minute mark, but as an expulsion of vitriol that benefits from slighter runtimes to hit more pointedly, that does work in Rotting Out’s favour. It definitely helps that the production is designed to give these short bursts so much more oomph, with seismic guitar and bass tones and metallic drums that feel like the ideal backdrop for Delgado’s venomous, rabid shrieks. There are moments when things don’t click as well as they could – the attempt at a breakdown on Vessel genuinely sounds like it’s missing a layer of instrumentation – but Ronin is kept pleasingly tight and focused for the most part to allow Rotting Out to connect with as much force as they can.

It makes for a rare occasion within hardcore of this stripe where there’s a bit more longevity to the album beyond the initial hit, even taking into account that fact that there’s really been no shake-ups to the formula. But when there’s frankness that’s so unflinching and human, and a canvas that delivers those sentiments as viscerally as possible, Rotting Out prove there’s really no need to do anything huge when simply doing what’s already there better is more than enough. It’s why Ronin stands out to the extent that it does, augmenting such a familiarity with features that are a bit more weighty and running with it. Perhaps it doesn’t make for an all-time classic, but in the modern landscape, this does stand out fairly sizably, and on a comeback as vaunted as theirs, it’s exactly the right direction for Rotting Out to be heading in.

‘Ronin’ by Rotting Out is released on 10th April on Pure Noise Records.