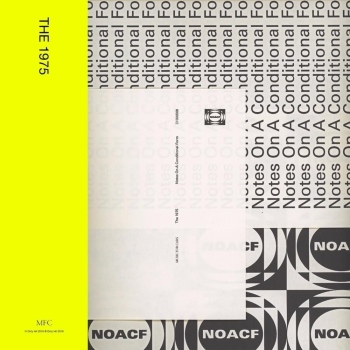 Looking back at how The 1975 started out, it’s almost inconceivable to work out how they got to this point. They were a fairly modest little indie-pop band at the start that few could’ve predicted would morph into what they’ve become in an almost complete rejection of that sort of straightforwardness, but given the impact that sound had and continues to have on pop and indie music, it’s not like that came right out of nowhere. That’s doubly true when you’ve got a frontman like Matty Healy, for whom the ballooning success of his band has seen him ascend to the role of pop-culture pariah in the vein of Elon Musk or flat earthers, where every move they make is scrutinised and derided but their cult of personality is too all-consuming to ignore. But the acknowledgment of such derision isn’t absolving Healy of his behaviour though, particularly when he seems to be the mastermind and driving force behind a band who have fully run off the rails and don’t look to be rectifying that in any way. As interesting as A Brief Inquiry Into Online Relationships was at the time, its longer-lasting impact and general memorability has been diminished at best, all thanks to the overextension that comes when a target as simultaneously nebulous and wildly unreachable as ‘be the next Radiohead’ is laid down on the table. And that’s clearly what this latter stage of The 1975’s career has been leading to, where they can get away with unorthodox creative strategies that’ll be bathed in acclaim from both their fanatic disciples and the media of whom they’ve already got on strings, regardless of how a more discerning and critical mind may view them. Why else was Notes On A Conditional Form originally supposed to release in May of 2019, not even six months after its predecessor? And the fact that hasn’t been achieved is almost a perfect showcase of how out of their depth The 1975 actually are, and making the finished product twenty-two tracks and almost an hour-and-a-half long reeks of overcompensation to ensure they still land in that vaunted upper echelon.

And because this is The 1975 and nothing involving them can ever be concise or straightforward, Notes… never hesitates in hammering in how insufferably pleased with itself it is, barrelling across musical landscapes in a way that its recording in sixteen different studios would hint towards, but never doing so with any particular rhyme or reason. Granted, that’s nothing new for The 1975, but this is that at its most egregious, where the sun-blocking ego and attempts to be important never feel in service of anything other than themselves. And of course, Healy stands at the epicentre of it all, the driving force that turns Notes… from a fragmented curio to a pretentious, shambolic waste of time, with his own sense of self-importance having to precedence over anything else. That would be enough to give this album a severe thrashing on its own, but paired with a musical canvas that’s more sprawling and formless than ever, Notes… ends up as borderline worthless for the grandstanding paradigm shift it was clearly positioned to be.

And as such, it’s worth singling out Healy as a presence here – something that he himself would most likely have no qualms with on its own – and examining just how little he actually achieves here. His desire to be the voice of a generation couldn’t be more clearly telegraphed but that desire comes at the expense of actually elucidating upon what that role requires; the broad themes remain broad throughout, and even when Healy attempts to do more with them, they still end up circling around the people and groups they’re supposed to be targeted towards to feed his own engorged ego some more. It’s conducive to what Yungblud has been doing his entire career, except instead of targeting his music exclusively for ten-year-olds who can’t think for themselves, Healy’s vision of young people more closely represents the cast of Skins than anyone actually real, where they’re all constantly high, horny, anxious or a combination of the three, and playing into his own visions of that makes Healy feel just as much like an underdeveloped, and often token, character within his own songs. If You’re Too Shy (Let Me Know) is the sort of online relationship song that’s exactly in this band’s field of view (it’s honestly a surprise they don’t reference OnlyFans by name), but when there’s a tossed-in line like “I’m sorry that I’m kind of queer” on Me & You Together Song that really has no bearing on anything else, or Phoebe Bridgers’ reference to masturbation on Jesus Christ 2005 God Bless America (in which the fact that she didn’t write it is particularly telling), they’re more akin to ticking boxes of demographics that The 1975 believe they should be appealing to, and going about achieving that in such a superficial way. Because for all the extended periods of strumming his own self-worth that Healy undergoes here, Notes… isn’t a deep album; it wants to believe it is in how it kicks off with Greta Thunberg’s address about climate change in its eponymous opening track, but People quickly follows that as a basic, beat-hitting political screed that fires wildly but seldom hits, and Frail State Of Mind and The Birthday Party run their themes of anxiety and social awkwardness through The 1975’s teen drama theme to feign some sort of ground level appeal. Their willingness to actually keep that going at points is commendable, given that Guys sees Healy take the focus off himself for a change for a love song dedicated to his bandmates, but having that as the very last song doesn’t so much quell any furore around the frontman’s clear narcissism and ego as it does repurpose it elsewhere, only to be actively acknowledged as a sticking point to so many on Roadkill.

But it deserves to be called out, especially when the rampant pretentiousness all across Notes… is almost never earned. The band clearly want to mask an uninspired thematic palette with instrumentation that matches their highfalutin mindset, only to turn out a fragmented mess where nothing they try is done exceptionally well and ‘abstraction’ is once again treated as a synonym for good. And it really is the noxious air of simply not caring that runs through this album which sours it all the faster, and how the pick-and-choose approach is done under the vain banner of ‘genrelessness’ rather than anything creatively stimulated. They’ve made their disdain for rock music known in the past, which makes itself all the more evident when People opts for a blown-out punk backdrop with a simplicity that feels indicative of a sneering condescension, or when Then Before She Goes and Roadkill feel so lazy and loosened in their indie-rock meandering. There’s honestly little indication that The 1975 actually enjoy making music, when so much of Notes… falls into a lifeless, sucked-out void that views enjoyabilily as flippant and unnecessary. That can be the only explanation for why so much of this album is content with dragging itself through dull, colourless slogs and piling on the vocal manipulation to sever any human connection even further, with the only true moment of light coming in the gummy Tears For Fears pastiche If You’re Too Shy (Let Me Know). Otherwise, the bleak production makes forays into misty drum ‘n’ bass on Yeah I Know and I Think There’s Something You Should Know all the less appealing, and the creaking acoustics of Jesus Christ 2005 God Bless America feel just as throwaway as any other no-name indie-folk song.

It can’t be as though The 1975 actually care though; if they did, they wouldn’t have stuffed this album with as much filler as it has, and while it’s tempting to be gauche and bundle the vast majority of these tracks under that banner, the return to extended, unnecessary electronic passages and interludes makes this already gruelling experience feel even worse. It’s astounding that people actually pretended to like the intro when it was released as a single (for some reason) because of the content, as there’s no chance it’s ever going to be listened to again, such is the case with the useless symphonic fragments The End (Music For Cars) and Streaming that clog up the front end, or the six-minute block of forgettability that is Having No Head which proves to be an endurance test in itself. The single time anything likes this works is on Shiny Collarbone thanks to a propulsive house thrum that actually fares surprisingly well as a dance track in its own right, something that makes the fact it’s actually listenable feel even more like a fluke. After all, on their crusade to make oblique boredom turn heads out of brand recognition alone, what possible reason would The 1975 have to go out of their way to give their audience some actual entertainment?

Because let’s be honest – entertainment factor is comfortably towards the bottom of Notes…’ particular rubric. It doesn’t feel as though much has been given priority besides creating yet another self-indulgent vehicle for Healy to wank himself stupid for nearly an hour-and-a-half, and that should be a damning indictment on what The 1975 are doing in modern music. They’re one of the biggest bands around at this point, and the fact that they can get away with an album as bafflingly naked in its intentions as this is, frankly, disgusting. There’s nothing worth listening to on this album that you won’t find done elsewhere and done better, and at least then there’d actually be some connection to the work that’s being made, not a surface level appropriation of sounds that ranges from shamelessly cavalier to outright scornful. And when that’s being use to fuel the ego of its hypebeast-in-chief and little else, it would honestly be better if this album had never existed.

For fans of: Radiohead, The Japanese House, The Flaming Lips
Words by Luke Nuttall

‘Notes On A Conditional Form’ by The 1975 is out now on Dirty Hit Records / Polydor Records.