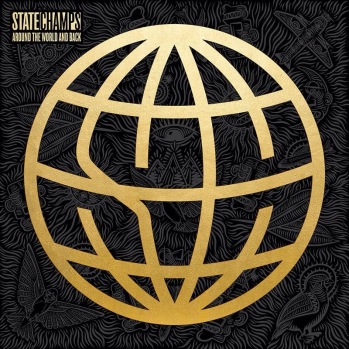 In a genre as tremendously glutted and overcrowded as pop-punk, it says a lot that a band like State Champs could come out of virtually nowhere and still send jaws dropping to the floor. It was all perfectly justified though – their debut full-length The Finer Things was everything wonderful about the genre since the turn of the century coalescing into one utterly phenomenal package. That’s what makes Around The World And Back such an important album for State Champs. It’s their chance to prove that they can maintain such momentum, and that their debut wasn’t some fluke or flash in the pan success. Thankfully the New Yorkers’ sophomore effort is as far away from a disappointment as is possible to get – this proof that State Champs are in it for the long haul.

The greatest thing about State Champs is that, while modern day pop-punk has a tendency to gravitate toward either extremity – the surly, bro-centric side or the radio-friendly, All Time Low-ish side – they’re smack bang in the middle. It’s the perfect convergence between unashamed poppiness and just the right amount of grit, something that Around The World And Back has nailed from the off. There’s also the huge early-2000s influence, taking the bands of the genre’s golden age and thrusting them into the modern day. There’s a reason that this album and Neck Deep’s Life’s Not Out To Get You – the two albums that have done this to the nth degree – are the two best pop-punk albums of the year, and it’s hardly going to be a coincidence. But none of that matters without songs, and by now it’s common knowledge that State Champs are more than capable of penning an album of wall-to-wall bangers. Secrets and All You Are Is History have a bounce and crunch that’s completely irresistible, and Perfect Score hits that elusive golden ratio between pop and punk that bands often struggle with. There’s hardly anything groundbreaking here, but there’s no doubt that tracks like Eyes Closed and the colossal Shape Up are the absolute pinnacle of what this much-maligned genre has reached in 2015.

But Around The World And Back isn’t just The Finer Things Part 2. Admittedly while they tend to stick to their winning formula for the majority of the album, there are a couple of instances where State Champs cast off their restrictive shackles for something a bit unexpected. The results are All Or Nothing and the title track – the former is a mid-tempo stunner in the vein of a less cynical post-hiatus Blink-182, while the latter is a sweet little acoustic duet with Jule Vera frontwoman Ansley Newman that wouldn’t feel out of place on last year’s The Acoustic Things EP. While there’s a stylistic left turn though, both tracks remain coated in the sunny picturesqueness that comes in Derek Discanio’s vocals that, refreshingly, don’t shove a grating over-Americanness down the listener’s throat. So now, not only are State Champs one of the best pop-punk bands in the world, they also do ballads better than pretty much anyone else too.

If there is a complaint to be made – and this is nitpicking at its absolute worst – it’s that Around The World And Back isn’t the same sort of sucker punch as The Finer Things was, but it would be cruel to hold that against them, especially when the rest of the album arguably improves upon its predecessor. Honestly, it does – the songs are bigger, they’re better written and there’s a urgency present that was occasionally absent on their debut. Seriously, just listen to this album. It’s about as close to perfection as pop-punk gets.

‘Around The World And Back’ is released on 16th October on Pure Noise Records.